EIS of Organic Coatings and Paints

All my impedance spectra look the same!

This complaint is very common.

“I’m an experienced polymer chemist. I’m trying to use Electrochemical Impedance Spectroscopy (EIS) to predict the corrosion resistant properties of paints. I’ve recorded many EIS spectra on painted metal samples immersed in electrolyte. All (or most) of these spectra look the same, regardless of the changes that I makes in my paint formulation. I obviously cannot use the results to evaluate paint performance. What’s going on?”

There are two common causes for this complaint:

The second cause is more likely. The spectra look the same because you are measuring the characteristics of your potentiostat, not those of the paint.

The rest of this application note describes the effects that a potentiostat can have on EIS measurements of coated metals. Gamry Instrument potentiostats will be used as examples, but the discussion will apply to EIS systems built around any potentiostat.

This note concludes with some specific recommendations for getting meaningful EIS spectra on coating systems that are difficult to measure.

You also need a basic understanding of EIS to follow the discussion in this note. Experienced EIS users should have no problems with the level of the discussion. If you are less experienced or you want to brush up on your basics, try our application note primer on EIS theory and practice.

The capacitance relationship is:

Notice the large difference between the dielectric constant of water and that of an organic coating. The capacitance of a coated substrate changes as it absorbs water. EIS can be used to measure that change.

A metal covered with an undamaged coating generally has very high impedance. The equivalent circuit for this situation is in Figure 1.

The model includes a resistor (electrolyte resistance) and the coating capacitance in series. A Nyquist plot for this model is shown in Figure 2. In making this plot, we assigned the following values: The value of the capacitance, C, cannot be determined from the Nyquist plot. It can be determined by a curve fit or from an examination of the data points. The intercept of the curve with the real axis gives an estimate of the solution resistance.

The highest impedance on this graph is close to 1010 Ω. This is close to the limit of measurement of many EIS systems. Most coatings degrade with time, resulting in more complex impedance behavior than the capacitive coating discussed above.

After a certain amount of time, water penetrates into the coating and forms a new liquid/metal interface under the coating. Corrosion phenomena can occur at this new interface.

The impedance of coated metals has been very heavily studied, but the interpretation of impedance data from failed coatings can be very complicated. Only the simple equivalent circuit shown in Figure 4 is discussed here.

Even this simple model has been the cause of some controversy in the literature. Most researchers agree that this model can be used to evaluate the quality of a coating. However, they do not agree on the physical processes that create the equivalent circuit elements. The discussion below is therefore only one of several interpretations of this model.

Cc represents the capacitance of the intact coating. Its value is much smaller than a typical double layer capacitance. Its units are pF or nF, not µF. Rpo (pore resistance) is the resistance of ion-conducting paths that develop in the coating. These paths may not be physical pores filled with electrolyte.

On the metal side of the pore, we assume that an area of the coating has delaminated and a pocket filled with an electrolyte solution has formed. This electrolyte solution can be very different from the bulk solution outside of the coating. The interface between this pocket of solution and the bare metal is modeled as a double-layer capacitor in parallel with a kinetically controlled charge- transfer reaction.

To test a coating via EIS, you fit a model to the data. The fit estimates values for the model’s parameters, such as the pore resistance and the double-layer capacitance. You then use these parameters to evaluate the degree to which the coating has failed.

In order to show a realistic data curve, we need to do this operation in reverse. Assume that we have a 10 cm2 sample of metal coated with a 12 µm-thick film and that we have five delaminated areas. 1% of the total metal area is delaminated. The pores in the film that gain access to these delaminated areas are represented as solution-filled cylinders, each with a diameter of 30 µm.

The parameters used to develop the curves are:

With these parameters, the Nyquist plot for this model is shown in Figure 5. Notice that there are two well-defined time constants in this plot. The Bode plot of the same data is shown in Figure 6. The two time constants are visible but less pronounced on this plot. Problems in Measurement of Small Signals

The impedance of a 10 nF capacitor at 1 kHz is 16 kΩ. With a 10 mV excitation at this frequency a potentiostat measures 630 nA.

The impedance of a 10 pF capacitor (often representative of a thick coating) at 1 kHz is 16 MΩ. With a 10 mV excitation, the potentiostat has to measure 630 pA.

Basic physics and the realities of electronics design and construction make it difficult to measure small currents. The problem is especially severe for small AC currents at high frequencies. The application note “Small Electrochemical Signals” discusses in-depth such technical problems.

The result of these limitations is discussed in the following sections.

There is a very simple test you can run to test the limits of your potentiostat and its associated EIS system. Record an EIS spectrum with no cell attached. We call this test the “Open Lead Experiment”, and see this application note for detailed instructions on how this measurement is made.

The EIS spectrum recorded in an Open-lead Experiment using a Gamry Instruments’ Reference 620 with a 10 mV excitation voltage is seen in Figure 7. The open-lead spectrum is fairly repeatable for a given hardware/software system. However, different potentiostats (with the same model number) may show variations in the spectrum, especially in the low frequency region. Differences of one-half a decade in impedance are not uncommon.

The results of the open lead test and a few other tests allow you to generate what we call the Accuracy Contour Plot.  The accuracy of your impedance measurements can be predicted from this graph. An accuracy contour map for the Reference 620 is shown in Figure 8. 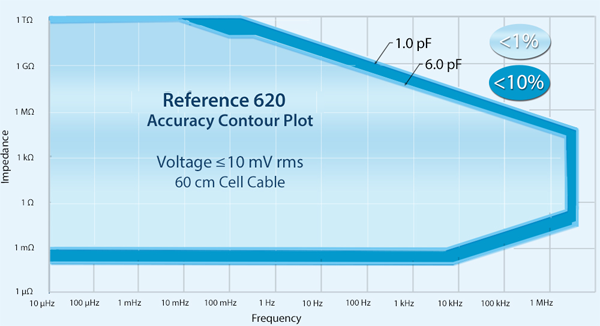 This map applies when the EIS300 is operating with a Reference 620 potentiostat in controlled-potential mode. The AC excitation is 10 mV and a high-quality faraday shield surrounds a cell isolated from earth ground.

On the contour map, each impedance measurement is a single point, defined by the frequency and the measured impedance at that frequency. Notice that the enclosed areas in the map are labeled with two numbers. They are the maximum error in percent of reading and maximum phase-error at any point in the labeled region.

unspecified, even though the instrument may function.

Notice the diagonal boundary lines that are labeled with equivalent capacitor values. You cannot measure a capacitor smaller than 30 pF, unless you are willing to accept errors of greater than 10% and 10°.

The accuracy contour map shown above only applies to isolated cells. It does not apply when the potentiostat is used to make measurements on earth-grounded “real world” systems such as highway bridges or pipeline probes. All cells with a connection to earth ground will severely degrade the system performance. Degradation of two orders of magnitude in impedance is common.

An accuracy contour map is valid for only one excitation (AC) amplitude. The map in Figure 8 applies at a 10 mV excitation amplitude. In most cases, increasing the amplitude shifts the limits on the map upwards.

You may have noticed that the accuracy contour map has additional diagonal lines in its lower right-hand corner. This region is generally not of interest in EIS on coatings, so it is not discussed here.

Careful experiment design is required if you expect optimal performance from your EIS system. The following hints may prove helpful.

A Faraday cage surrounding your cell is mandatory for very low-level measurements. It reduces both current noise picked up directly on the working electrode and voltage noise picked up by the reference electrode.

A Faraday cage is a conductive enclosure that surrounds the cell. The cage can be constructed from sheet metal, fine mesh wire screen, or even conductive plastic. It must be continuous and completely surround the cell. Don’t forget the areas above and below the cell. All parts of the cage must be electrically connected.

The cage must be electrically connected to the potentiostat’s ground terminal.

Avoid sources of electrical noise. Some of the worst are:

Avoid AC-powered or computerized apparatus within your Faraday cage.

Your cell leads must have a resistance higher than that of the impedance you are trying to measure. If you use coaxial cable we recommend a virgin PTFE dielectric. Long leads can severely degrade the AC response of your potentiostat.

Many coating tests involve cells with capacitances so small that the capacitance between the potentiostat’s leads can result in an error. Alligator clips may have 10 pF or more of mutual capacitance if they are run alongside each other.

If you wish to avoid excessive capacitance due to lead placement,

The cell leads must not be moved during an experiment which measures small currents. Both microphonic and triboelectric effects can create spurious results when the cell cables are moved.

Make sure that your cell construction does not limit your response. A cell in which the resistance of the insulating material between the electrodes is only 1010 Ω cannot be used to measure 1012 Ω impedances. In general, glass and PTFE are the preferred materials for constructing cells.

You also must worry about shunt capacitance. Make the “inactive” portion of your electrodes as small as possible. Avoid placing electrodes close together and parallel to each other.

How to Measure an Impossible System

What can you do if you are faced with a sample that will produce data outside the defined regions of the accuracy contour map? These suggestions may help.

Larger AC amplitude may help you make difficult measurements. As discussed above, increasing the amplitude can move the low-frequency limits in the accuracy contour map upwards. It has less effect on the minimum capacitance.

One concern is that the electrical field created by the excitation will cause failure in the paint. A five-volt excitation across a 25 µm-thick coating creates a field of 200 kV/m. Most bulk plastics (except PVC) claim dielectric strengths in excess of 12 MV/m. Assuming coatings are one-tenth as good as bulk plastics, dielectric breakdown should not be a factor unless the coating thickness is less than 5 µm.

Electrode area is a critical experimental parameter. In general, EIS measurements on coatings should use as large an area as possible. Increasing the area has several beneficial effects: