A potentiostat (Figure 1) is an electronic instrument that controls the voltage difference between a Working Electrode and a Reference Electrode. Both electrodes are contained in an electrochemical cell. The potentiostat implements this control by injecting current into the cell through an Auxiliary, or Counter, electrode. 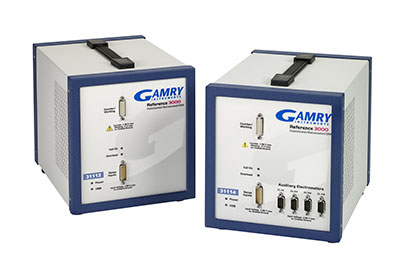 This Application Note may be difficult to follow unless you have some familiarity with electrical terms such as voltage, current, resistance, frequency, and capacitance. If your knowledge in this area is lacking, we suggest review of a basic electronics or physics book.

A potentiostat requires an electrochemical cell with three electrodes.

For batteries, the potentiostat is connected directly to the anode or cathode of the battery. 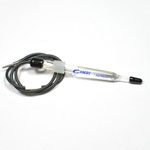 The most common lab Reference Electrodes are the saturated calomel electrode (SCE) and the silver/silver chloride (Ag/AgCl) electrodes (Figure 2). In field probes, a pseudo-reference (a piece of the Working Electrode material) is often used

The Counter, or Auxiliary, Electrode is a conductor that completes the cell circuit.

A simplified schematic of a Gamry Instruments’ potentiostat is sketched in Figure 3. 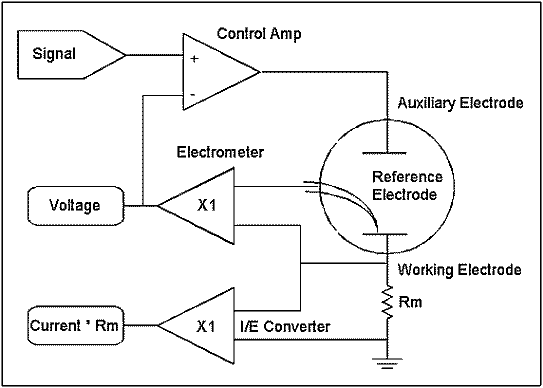 Figure 3. Simple schematic of a potentiostat.

The electronic circuit consists of four blocks discussed in turn. If you are not familiar with electronics, don’t despair; you can still learn from the information that follows.

In this schematic, ×1 on an amplifier indicates that the amplifier is a unity-gain differential amplifier. The output voltage of this circuit is the difference between its two inputs.

The blocks labeled Voltage and Current × Rm are the voltage and current signals that are sent to the system A/D converters for digitization.

The electrometer circuit measures the voltage difference between the reference and working electrodes. Its output has two major functions: it is the feedback signal in the potentiostat circuit, and it is the signal that is measured whenever the cell voltage is needed.

An ideal electrometer has zero input current and an infinite input impedance. Current flow through the reference electrode can change its potential. In practice, all modern electrometers have input currents close enough to zero that this effect can usually be ignored.

The electrometer input capacitance and the reference electrode resistance form an RC-filter. If this filter’s time constant is too large, it can limit the effective bandwidth of the electrometer and cause system instabilities. Smaller input capacitance translates into more stable operation and greater tolerance for high impedance reference electrodes.

Cell current in some experiments don’t change much. In other experiments, such as a corrosion experiment, the current can often vary by as much as seven orders of magnitude. You cannot measure current over such a wide range using a single resistor. A number of different Rm resistors can be automatically switched into the I/E circuit. This allows measurement of widely varying currents, with each current measured using an appropriate resistor. An “I/E autoranging” algorithm is often used to select the appropriate resistor values.

The I/E converter’s bandwidth depends strongly on its sensitivity. Measurement of small currents requires large Rm values. Stray (unwanted) capacitance in the I/E converter forms an RC-filter with Rm, limiting the I/E bandwidth. No potentiostat can accurately measure 10 nA at 100 kHz because the bandwidth on this current range is too low to measure a frequency of 100 kHz. This effect becomes very, very important in EIS measurements!

The control amplifier is a servo amplifier. It compares the measured cell voltage with the desired voltage and drives current into the cell to force the voltages to be the same.

Under normal conditions, the cell voltage is controlled to be identical to the signal source voltage.

The signal circuit is a computer-controlled voltage source. It is generally the output of a Digital-to-Analog (D/A) converter that converts computer-generated numbers into voltages.

Proper choice of number sequences allows the computer to generate constant voltages, voltage ramps, and even sine waves at the signal circuit’s output.

When a D/A converter is used to generate a waveform such as a sine wave or a ramp, the waveform is a digital approximation of the equivalent analog waveform, with small voltage steps. The size of these steps is controlled by the resolution of the D/A converter and the rate it at which it is being updated with new numbers.

A ZRA allows you to force a potential difference of zero volts between two electrodes. The cell current flowing between the electrodes can be measured. A ZRA is often used to measure galvanic corrosion phenomena and electrochemical noise.