This application note is part of a series concerning dye solar cells. Theory and various types of experiments are discussed that are needed for characterization of solar cells.

Another important source for renewable energy is solar power. Photovoltaics and solar thermal collectors are most widely used.

Dye solar cells (DSCs) which are discussed in this application note are thin film cells. They are also called dye sensitized solar cells (DSSC) or Grätzel cells named after the Swiss chemist Michael Grätzel who was greatly involved in the development of new cell types.

Manufacturing of DSCs is simple, mostly low cost, and incorporate environmentally friendly materials. They have a good efficiency (about 10-14 %) even under low flux of sunlight.

However, a major drawback is the temperature sensitivity of the liquid electrolyte. Hence a lot of research is going on to improve the electrolyte’s performance and cell stability.

Setup of a Dye Solar Cell

Figure 1 shows a simplified diagram of a dye solar cell. The anode of a DSC consists of a glass plate which is coated with a transparent conductive oxide (TCO) film. Indium tin oxide (ITO) or fluorine doped tin oxide are most widely used. A thin layer of titanium dioxide (TiO2) is applied on the film. The semiconductor exhibits a high surface area because of its high porosity.

The anode is soaked with a dye solution which bonds to the TiO2. The dye – also called photosensitizers – is mostly a ruthenium complex or various organic metal free compounds. For demonstration purposes, also plain fruit juice (such as from blackberries or pomegranates) can be used. They contain pigments which are also able to convert light energy into electrical energy.

The cathode of a DSC is a glass plate with a thin Pt film which serves as a catalyst. An iodide/triiodide solution is used as the electrolyte.

Both electrodes are pressed together and sealed so that the cell does not leak. An external load can be powered when light shines on the anode of the dye solar cell.

Principle of a Dye Solar Cell 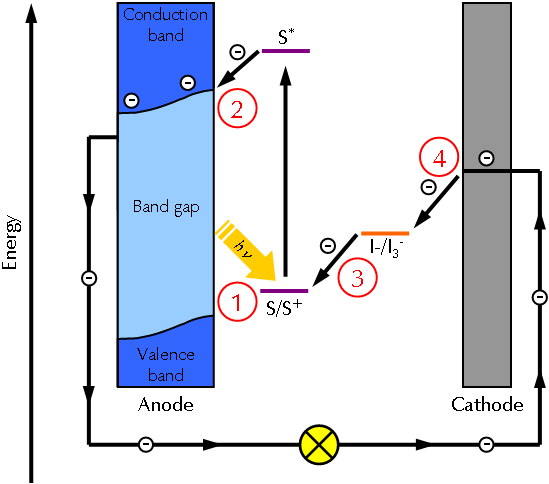 Figure 2 – Energy diagram of a dye solar cell. Highlighted in red are all single steps which are explained in the text.

STEP 1:  The dye molecule is initially in its ground state (S).  The semiconductor material of the anode is at this energy level (near the valence band) non‑conductive.

When light shines on the cell, dye molecules get excited from their ground state to a higher energy state (S*), see equation 1.

The excited dye molecule has now a higher energy content and overcomes the band gap of the semiconductor.

STEP 2:  The excited dye molecule (S*) is oxidized (see equation 2) and an electron is injected into the conduction band of the semiconductor.  Electrons can now move freely as the semiconductor is conductive at this energy level.

Electrons are then transported to the current collector of the anode via diffusion processes.  An electrical load can be powered if connected.

STEP 3:  The oxidized dye molecule (S+) is again regenerated by electron donation from the iodide in the electrolyte (see equation 3).

STEP 4:  In return, iodide is regenerated by reduction of triiodide on the cathode (see equation 4).

A solar cell generates current when light shines on it.  The output current depends strongly on the potential of the cell as well as intensity of the incident light.  Current‑potential curves (also called I‑V curves) illustrate the relationship.

Similar to standard cyclic‑voltammetry experiments, a potential E is applied and swept between an initial and final potential.  The current I of the cell is measured.  In addition, a light source with a constant intensity is focused on the solar cell to generate power.

Figure 3 shows a typical I‑V curve of a solar cell for increasing light intensities and when no light is present. Figure 3 – Schematic diagram of I-V curves with and without light. For details, see text.

A dye solar cell behaves like a diode when no light is present.  No current is generated and energy is needed to power the cell.

The I‑V curves shift further down when light is focused on a DSC.  The solar cell generates now current which increases with increasing light intensities.

Current flux is nearly constant at lower potentials.  It reaches its maximum when the potential is zero.  The generated current decreases with increasing potential.  It is zero at the open‑circuit potential.  Above this potential, an external bias voltage is needed to power the cell.  The cell can get damaged at excessively high values.

Several parameters can be derived from I‑V curves which are discussed in the following sections.  Figure 4 shows a schematic overview of an I‑V curve including parameters. The short circuit current ISC is the highest current that can be drawn from a solar cell. The cell voltage is at this point zero. Hence the generated power is also zero.

The open circuit potential EOC is the highest voltage of a solar cell at a given light intensity. It is also the potential where current flow through a solar cell is zero.

The generated power P of a solar cell can be calculated by the following formula:

The calculated power can be also plotted versus the applied potential (see Figure 4). The resulting power curve exhibits a power maximum Pmax.

The Fill factor (FF) is an important parameter to specify the overall capabilities of a cell.  It describes the quality and idealness of a solar cell.

The Fill factor is the ratio of maximum generated power Pmax to theoretical power maximum Ptheo of a solar cell.  The general formula for the Fill Factor is:

EMP and IMP are potential and current of the I V curve where the generated power is at the maximum.

The Fill factor can be also represented by rectangles in an I‑V curve.  Figure 5 shows a schematic illustration. In the ideal case, an I-V curve is a rectangle (green area). The power maximum is at EOC and ISC and the Fill factor is one.

However, non ideal conditions caused by parasitic effects decrease the power maximum and the I-V curve rounds off. The resulting true area which represents the power maximum (blue rectangle) is smaller. It is covered by the potential EMP and current IMP.

Note that the Fill Factor is not equal to the efficiency of a solar cell.

Figure 6 and Figure 7 show how both resistances affect the shape of an I‑V curve. Figure 6 – Effect of the series resistance RS on the shape of an I-V curve.

The series resistance RS can be estimated by the inverse of the slope near the open circuit potential (see Figure 6).

Ideally, the series resistance would be zero. However, resistances of metal contacts or bulk substrate lead to an additional voltage drop within the cell. As a result, the slope of the curve near EOC decreases with increasing RS. Hence both the area under the curve and the power maximum decrease.

Note that the open circuit potential EOC is not affected by RS because the current flow is zero. The short circuit current is also unaffected by RS. Only very large values can lead to a reduction of ISC. Figure 7 – Effect of the shunt resistance RSH on the shape of an I V curve.

The shunt resistance RSH can be modeled by a parallel resistor. It is mainly caused by leakage current through the cell caused by impurities or defects in the manufacturing process.

The efficiency η is the ratio between maximum generated power Pmax and electrical input power Pin from the light source.

In order to calculate the efficiency, the power of the incident light Pin has to be known.

The following sections describe various experiments with dye solar cells.  All DSC accessories are from Solaronix.  The solar cell uses titania and platinum electrodes.  The electrolyte is a 50 mM iodide/triiodide solution in acetonitrile.  Ruthenizer 535‑bisTBA is used as dye.  The active area of the cell is 0.64 cm2.

Figure 8 shows a series of I‑V curves with increasing light intensities (from bright to dark).  The potential of the solar cell was swept between 0 V and the open circuit potential for several cycles.  The sweep rate was 5 mV/s to ensure a steady‑state cell operation.

The light intensity of the red LED (625 nm) was stepwise increased from 5.1 mW to 37.2 mW for each curve.  Only the last forward cycle for each intensity is shown.  The distance between LED and dye solar cell was 3 cm. The following table lists up several parameters that can be evaluated from the I V curves and power curves shown in Figure 8 and Figure 9.

Table 1 – Summary of parameters calculated from I V curves and power curves.

The Fill factor stays nearly constant at about 0.78. It is smaller at low light intensities.

The efficiency is in general very low at about 0.6 %. In this regards, note that a red LED with a narrow wavelength range was used for these experiments. The efficiency slightly decreases with increasing light intensities.

In addition, RS and RSH can be estimated from the slopes of an I-V curve (see also Figure 6 and Figure 7). Table 2 sums up a list of calculated resistances for the I-V curves shown in Figure 8.

The results show that both RS and RSH are decreasing with increasing light intensities.  Lower RS‑values tend to increase Fill factor and efficiency of a DSC.  However, decreasing RSH–values can negatively affect the performance of a DSC.

Both trends can be explained by rising conductivities caused by higher temperatures within the cell.  The following section explains the effect of temperature on a DSC.  It also addresses various issues which should be taken into account of when performing experiments with DSCs.

Temperature changes affect the performance of a dye solar cell.  Dye solar cells do warm up when light shines on the cell.  This can affect the Fill factor as well as the efficiency of a DSC.

This leads on the one hand to rising conductivities.  As a results, the short‑circuit current is increasing.  On the other hand, the open‑circuit potential is decreasing.  Figure 10 illustrates this effect.

For this experiment, light was focused on a cold DSC and several consecutive I‑V curves were measured (from bright to dark).  The light intensity was kept constant at 37.2 mW. Initially, the incident light slowly warms up the solar cell . In this phase, short circuit current and open circuit potential are drifting significantly and slopes of the curves near ISC and EOC are changing.

The I-V curves begin to overlap not until after 40 cycles when the cell temperature stabilized.

Another relevant parameter when measuring I‑V curves is the scan rate.  High scan rates can lead to significant hysteresis between forward and reverse cycle (see Figure 11). Figure 11 – Hysteresis effect between forward and reverse cycle during an IV experiment.

Hysteresis is mainly caused by polarization effects as well as light induced changes in the cell’s chemistry. Differences between forward and reverse cycle make data evaluation more difficult and can lead to wrong results. In order to find a suitable scan rate we recommend that you perform several cycles while adjusting the scan rate.

Low scan rates increase the measurement time but they reduce the hysteresis effect.  In addition, low scan rates allow steady‑state cell operation.  If I‑V curves show only minor hysteresis, data of forward and reverse cycle can be averaged together.

This application note relates to measurements with dye solar cells (DSCs).  Basic principles and the setup of DSCs are discussed.  In addition, several important parameters are explained and calculated.

Experiments with real DSCs are performed using a red LED.  I‑V curves are measured and converted into power curves.  Both curves are used to calculate different important parameters to characterize the DSC.