Measuring the Optical Power of your LED

When performing experiments with dye solar cells, light is focused on a cell and its current or voltage response is measured. The generated power depends strongly on the intensity of the light.

In order to perform experiments with dye solar cells, two synchronized potentiostats of the same family are needed. The “master” potentiostat controls the LED. The “serf” potentiostat is used for measuring.

The photodiode is used as dummy cell. It allows measuring and calculating the optical power of the light source. This parameter is needed to calculate the efficiency of your cell.

The active area of the photodiode has a diameter of 0.9 cm, which gives a sample area of 0.636 cm2. It also includes an adapter cable for connecting a potentiostat. The light source in the setup is optional. You may either provide your own light source or use one of Gamry’s LEDs, see Table 1. 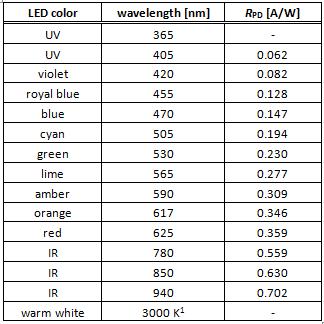 All LEDs are galvanostatically controlled with a maximum rated current of 1 A. Their power output is typically between 170 mW and 770 mW. Each LED provides four banana jacks for connecting a potentiostat.

The intensity I of a light source depends strongly on the distance. Imagine a light bulb that emits light equally in all directions (see Figure 2). The intensity is greatest at the center and decreases with increasing distance r.

The decrease of intensity follows the inverse‑square law of light (see also equation 1). This means that at a distance twice as far from the light source, light is spread over an area which is four times bigger. Hence intensity is only one‑fourth of the initial intensity I0.

The same is true when measuring dye solar cells. Only a small portion of light that is emitted from the LED reaches the active area of the DSC.

However, the intensity of the incident light – from now on referred to as optical power Pin – is needed in order to calculate the efficiency h of the DSC (see also equation 2).

Pmax is the power maximum of a DSC at constant light intensity. This parameter can be obtained from I‑V curves.

Responsivity of a photodiode

A photodiode can be used to calculate the optical power Pin of light.

Similar to DSCs, photodiodes generate current when light shines on them. The amount of current depends on the light power as well as wavelength of the incident light. This relationship is called responsivity (RPD). It is generally measured under short‑circuit conditions (0 V) and is typically indicated in the data sheet of a photodiode.

Figure 3 shows the responsivity curve of the photodiode used in Gamry’s Optical Bench. The graph is provided by Thorlabs Inc. Note that RPD strongly depends on the wavelength of the light source. Table 1 lists single responsivity values for all colored LEDs which Gamry currently offers. The responsivity RPD can be used to calculate the optical power density pPD of the light that shines on the active surface area of the photodiode.

Here iPD is the generated current density from the photodiode under constant illumination.

The optical power Pin of the light that shines on a DSC can then be calculated (see equation 4). ADSC is the active area of the dye solar cell.

Generally, photodiodes are only used for narrow‑band light sources (see Table 1) in order to measure the optical power.

Broadband light sources (e.g., warm-white LEDs) perform poorly with photodiodes because the responsivity depends on the wavelength. Only relative power changes can be measured. Typically, thermal power sensors are used for broadband LEDs to measure the optical power output.

The photodiode replaces the dye solar cell when measuring pPD. The distance between photodiode and light source should be similar to experiments with real DSCs. We recommend that you darken the environment around the setup in order to block ambient light which can falsify the results.

Figure 4 shows a series of potentiostatic experiments under constant illumination. The potential of the photodiode was set to 0 V (short‑circuit conditions) and its current response was measured. The distance between photodiode and light source was adjusted to 3 cm. Figure 4 – Current curves of the photodiode with increasing light intensities (from bright to dark). For details, see text.

The current density is automatically calculated by the Echem Analyst. As expected, the current increases with increasing light intensities.

Keep in mind that the photodiode is warmed up by the LED. This can lead to small changes in the measured current over time. We recommend running an experiment either until the measured current is constant at a given intensity or using only very small scan rates when linearly sweeping the applied current signal.

Table 2 lists the results from the previous measurements. The responsivity factor RPD for this LED is 0.359 (see also Table 1). 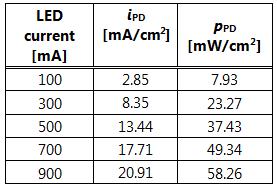 With these results, the optical power Pin (Eq. 4) of the incident light and the efficiency (Eq. 2) of your DSC can be calculated.

It is described how to use the photodiode as dummy cell.  The photodiode allows measuring the optical power output of your light source. This parameter is needed in order to calculate the efficiency of your dye solar cell.