Demystifying Transmission Lines: What Are They? Why Are They Useful?

Though transmission lines are commonly used, an introductory paper was hard to find. This paper is intended to serve that purpose. It assumes basic knowledge of EIS and modeling using equivalent circuits as covered in our EIS application note.

Figure 1. Porous Electrodes and the Nomenclature That Will Be Used in This Paper.

The base electrode and the porous electrode are electrically connected and generally based on the same material. For most systems, however, they behave sufficiently differently at the interface with the electrolyte that maintaining this distinction is useful.

,ζ are the repeating circuit blocks on the rails and the steps. ZA and ZB correspond to impedances across the interfaces A and B defined in Figure 1.

A transmission line model in generic form is shown in Figure 2. ζ,

,ZA and ZB are defined as subcomponents that can take various forms. These may be as basic as single resistors and as complicated as necessary.

as rail impedances and ζ as the step impedance using a ladder analogy. ZA and ZB are the impedances of the two interfaces A and B shown in Figure 1.

represents the length of the transmission line (or the depth of the pore) as shown in Figure 2. It can be visualized as the number of steps in the ladder. Once the fitting is done, the numbers that are characteristic of the sample are

. The value and the units of

has to be decided on before the fitting is attempted and has to be locked to a particular value. We will assume

to be unitless for this paper to keep this discussion straightforward In practice, knowledge of the thickness L allows to determine important parameters such as the conductivity and diffusion coefficient from the impedance fit results.

The generic equation governing the impedance of the entire line shown in Figure 2 is (from Bisquert,J.i):

In the Echem Analyst, the circuit in Figure 3 is implemented with

≡r2, ZA ≡RA||QA and ZB≡RB as shown in Figure 3 and named “Unified”. These blocks were implemented using the procedure described in our “User Defined Components for EIS Modeling” application note. They can easily be modified for specific needs and incorporated into the model. Detailed instructions can be found in our Technical Note regarding the “Implementation of Transmission Lines Using Generalized Circuit Blocks”.

Figure 3. The Specific Model Implemented in Echem Analyst as "Unified". Where,

Limiting cases can be easily achieved by adjusting the appropriate elements to be zero or very large. However, two models shown in Figure 4 are very commonly employed in the literature and are worthy of specific mention. Originally developed by Bisquert, J.ii to model diffusion- recombination processes, they have been applied to dye-sensitized solar-cellsiii, supercapacitors and a number of other areas.

We will follow the notation assumed by Bisquert, J.Error: Reference source not found and use

≡rm , ζ m≡rk||qm­. These models are very useful since it is typical to find in applications where the conductivity of one rail is much larger than the other one. These cases can be modeled well with one rail set to zero.

is Shorted, ZA is Open Circuit and ZB is Either Open Circuit or Short Circuit, from Bisquert et. al.Error: Reference source not found These are defined as Bisquert Open (BTO) (a) and Bisquert Short (BTS) (b) in the Echem Analyst.

Figure 5. Two Models That Are Used to Fit the Capacitor Data in Figure 6. a) The transmission line model, b) R-CPE model.

Ultracapacitors are currently being developed to generate strong energy bursts for a number of applications including uninterruptible power supplies, lasers, and power electronics for electric and hybrid vehicles. They provide a very high capacitance in a relatively small volume and weight utilizing porous materials that have very high specific surface areas.

Figure 6 shows the impedance spectra and the fits of a 5F capacitor1 at 0V DC and 1mV (rms) AC. 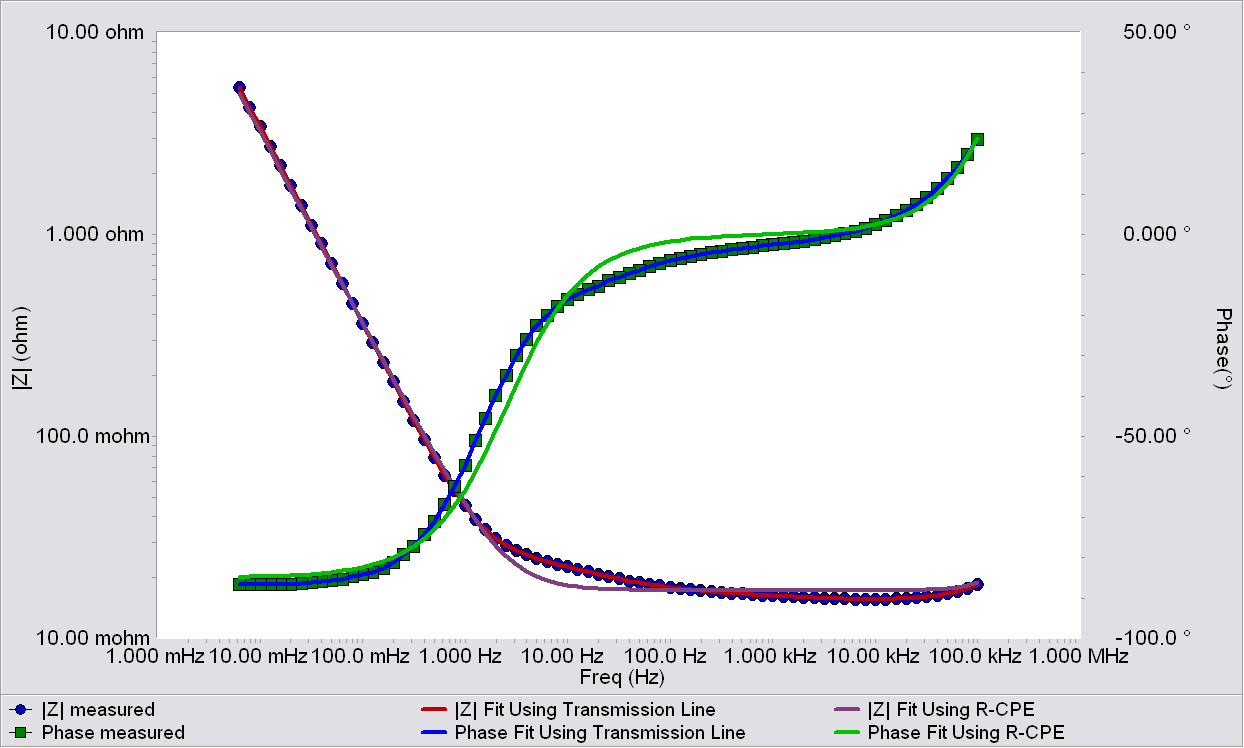 Figure 6. EIS Data of an Ultracapacitor and the Fits Using a Transmission Line and A Resistor and A Constant Phase Element in Parallel. The circuit models used are shown in Figure 6 and the fit results are shown in Table 1.

To fit the data we have tried the models shown in Figure 5. As seen in figure 6 the fit is excellent over the entire frequency range when the transmission line model is used and poor when R-CPE model is used. During the fit using the “Bisquert Open” model, parameter L was locked to 0.001 and Rk was locked to 1035Ω. These values have a gray background in table1. As the fit shows the R-CPE model misses a feature in the frequency range 10Hz-100Hz. The Yo value that comes out of the fit (after the L scaling described in the introduction) is 4.346 S s.0975 (notice S s1 would be F ).

Table 1. Fit Results for 5F Capacitor Using the Model Shown in Figure 6a. L and Rk were locked during the fit. Rk was chosen to simulate an open circuit.

Dye-Sensitized solar cells (DSC) are another application where transmission line models are regularly employed. Briefly, these are solar cells that utilize an organic or an organometallic dye molecule adsorbed on mesoporous TiO2 to absorb sunlight efficiently. The excited electrons are then extracted out through the TiO2. Again, the use of a porous electrode warrants the use of transmission lines.

Figure 7. The DSC Data and the Fit Using "Bisquert Open".

Figure 7 shows an impedance spectra of a DSC made using porous TiO2. The spectrum is fit using a “Bisquert Open” model and the fit is excellent over the entire frequency range. The fit results are summarized in Table 2.

Table 2. Fit Results for DSC Impedance Spectra Shown in Figure7. Fit using a “Bisquert Open” and a resistor in series.

In certain types of DSCs where an organic hole conductor is used instead of a liquid electrolyte the region A is not insulating. The circuit model has to include a parallel resistance and constant phase element combination to account for region A as shown in Figure 7. This type of model is employed in the literature to model this and other types of DSCsiv. 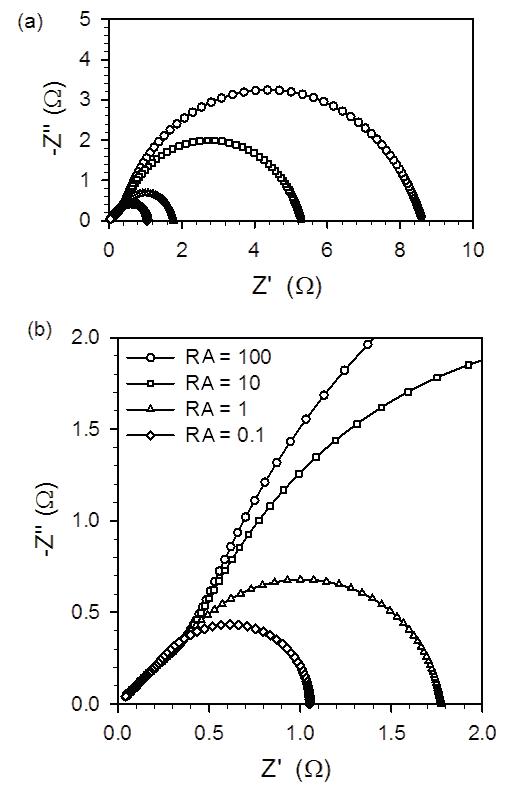 Though it is possible to generate the mathematical expressions for this and other particular cases (and it is done in the literature, see for example Bisquert, J. Error: Reference source not found), one can also use “Unified”(Figure 3) to fit this and other cases by adjusting the appropriate parameters to be zero or very large.

In order to employ Unified in fitting the data shown in figure 8 we need to force r2 to be a short circuit (i.e. r2=0 Ω) and RB to be an open circuit (i.e. RB→∞ or numerically RB should be much larger than any other relevant resistance in the fitting or the data). These values were locked during the fitting, and have a gray background in Table 2 and Table 3.

Table 3. The Fit Parameters for the Unified Model and the Four Data Sets Shown in Figure 6. The gray rows indicate the parameters that were locked during the fit. Notice r2 was locked to be a short circuit and RB was locked to open circuit. The top row corresponds to the legend of Figure 8.

Porous electrodes are regularly utilized for applications where a high surface area is beneficial. Impedance spectroscopy on porous materials regularly results in data that cannot be modeled with standard circuit components. Transmission lines are required due to the distributed nature of the interfacial impedance throughout the pore.

We gratefully acknowledge the data and very useful comments from Prof. Juan Bisquert and Dr. Francisco Fabregat-Santiago in the process of writing this paper.