How to Trigger a Spectrometer with Gamry Instruments’ Potentiostats

This Technical Note outlines how Gamry Instruments’ potentiostats can be used to send a trigger signal to a spectrometer. This allows measuring optical spectra at user‑defined times while simultaneously performing electrochemical experiments.

By combining both techniques, more insight can be gained into various systems, because optical and electrical responses can be measured and analyzed simultaneously. Typical application fields for spectroelectrochemical experiments include redox polymer processes, organometallic reactions, and bioelectrochemical studies.

For spectroelectrochemical measurements, control of both potentiostat and spectrometer is important, so that both experiments can start simultaneously. In this case, the potentiostat controls the spectrometer via a trigger signal.

In order to trigger external devices, potentiostat and spectrometer require auxiliary connectors that enable sending and receiving of a trigger signal. They need to be interconnected by a correctly wired cable. The potentiostat can be programmed later to send a signal to the spectrometer at a user‑defined time. This signal activates the spectrometer to begin measuring.

Most spectrometers that allow external triggering require a 5 V TTL (transistor-transistor logic) signal or TTL‑compatible signal from an external source in order to trigger.

A TTL signal is a voltage signal which can take on one of two states, “High” and “Low.” The High state is a 5 V signal and the TTL Low state is a 0 V signal. In reality, the input trigger signal is never exactly 0 V or 5 V. Hence High and Low states allow a broad voltage range, as shown in Fig. 1. Any voltages between both states result in non‑defined states. Such a non-defined state can arbitrarily change between High and Low.

A further important parameter for the trigger signal is its pulse width. The input signal must have a minimum length in order to being properly detected. The minimum pulse width of Gamry potentiostats is about 10–50 µs, which is generally long enough to trigger external devices.

Depending on the spectrometer hardware as well as software settings, different modes of triggering can apply to a spectrometer. This can affect the operation of a trigger signal. Fig. 2 shows the difference between both two modes. 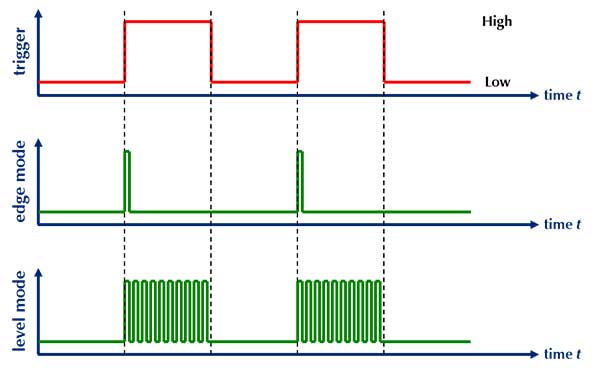 In “level mode”, the spectrometer triggers when the input signal shows either a sharp rise or fall. In addition, the spectrometer stays enabled as long as the signal holds the level and keeps continuously measuring. It stops when the polarity of the trigger signal is revered.

As mentioned in the previous section, a trigger cable which interconnects potentiostat and spectrometer is needed. The terminal for all Gamry potentiostats can be found on the rear side (see Fig. 3). The Misc. I/O connector is a high‑density 15‑pin female D‑sub connector. Each of the 15 pins is numbered and assigned to various functions.

Figure 4. Multipurpose User‑I/O cable which connects to all Gamry potentiostats.

On one end it has a mating male 15‑pin D‑sub connector which connects to the potentiostat. The other end has 14 color‑coded open wires which can be connected to any type of connector supported by the other instrument.

The following table lists all relevant pins that are typically required for triggering a spectrometer or any other external device: 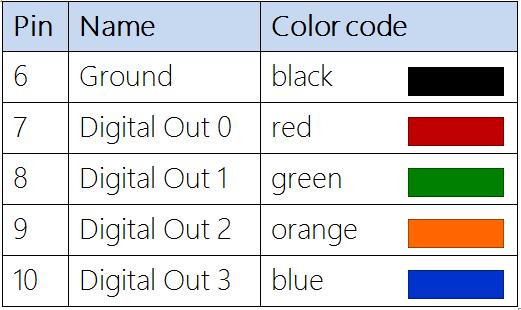 Pins 7 to 10 are four individual outputs sending a trigger signal to an external device. Locate the external trigger-input pin of the spectrometer’s auxiliary connector, and connect it to one of the four Digital Out output leads (pins 7–10) of the multipurpose cable.

Also be sure to locate the Ground pin of the spectrometer’s auxiliary connector. Connect it to the Ground lead of the Multipurpose User‑I/O cable (pin 6).

Gamry’s Sequence Wizard within the Framework™ software allows you to create customized experimental sequences. It also includes various functions for additional instrument control. The main function for setting a trigger signal is called Set Digital Out. Its setup window is shown in Fig. 5.

Fig. 5. Setup window for the Set Digital Out command within Gamry’s Sequence Wizard.

The command allows you to control each of the four outputs individually and set the state of the TTL signal: Low or High. Depending on the kind of instrument, either the Low or the High state enables the spectrometer.

The TTL signal is sent to the spectrometer after the sequence reaches the command Set Digital Out, and then continues with the next step.

Fig. 6 shows an example on an experimental sequence. The sequence consists of a chronoamperometric experiment followed by a potentiostatic EIS experiment. The applied potential is increased stepwise within the loop until it reaches a final value.

Fig. 6. Example of an experimental sequence using a trigger signal.

The second Set Digital Out command line disables the trigger right after the chronoamperometric experiment is finished, by reversing the polarity of the TTL signal. The sequence continues with a potentiostatic EIS experiment. The spectrometer does not measure any spectra during the EIS experiment.

The loop repeats itself after the potential is increased to a new value (Modify Variable) and continues until a final potential value is reached.

This technical note describes how Gamry potentiostats can be used to control external devices such as spectrometers by using a trigger signal. We introduce Gamry’s Multipurpose User‑I/O cable, which can be used to connect any external device to a Gamry potentiostat for addition control functions. Finally, we explain software implementation, with an example of an experimental sequence created by Gamry’s Sequence Wizard.