The ASTM standard G100: Conducting Cyclic Galvanostaircase Polarization (1) is a technique for assessing the susceptibility of alloys to localized corrosion.  It was specifically developed for aluminum alloy 3003:H14, but may also be relevant for other alloys.

Susceptibility to localized corrosion of aluminum is indicated by a protection potential (Eprot) determined by cyclic galvanostaircase polarization. The more noble this potential, the less susceptible is the alloy to initiation of localized corrosion.

This Technical Note serves two purposes – to introduce you to an alternative experiment for examining susceptibility of alloys to localized corrosion and also to show you how easy it is to modify an experiment in the Explain™ programming language. For an introduction to Explain, please reference our previous notes on Explain

Galvanostaircase is not a standard experiment in the DC corrosion package of the Gamry Framework, but because of the flexibility of the Explain programming language the experiment can be created with a small amount of programming.  By starting with the Galvanostatic experiment (galvanostatic.exp) and making the following changes in any text editor, galvanostatic staircase was created.  The main change was to create the applied signal which was made from the IMSTEP signal as shown below:

The data was output to a single data file allowing for the experiment to be opened in the Echem Analyst™ without any custom analysis scripting required.  This was accomplished by outputting the data using a Printl function that mimics the Curve.Print() that is part of curve function.

The test cell was based on the Gamry Paint Test Cell (PTC1) with a flat aluminum sheet cut from an uncoated soda can and a Portholes mask attached to the surface to restrict the exposed area.  An area of 3 cm2 was exposed.  The reference electrode was a silver/silver chloride reference electrode and the counter electrode was a graphite rod.  The test solution was a sodium chloride solution with a concentration of 6g of sodium chloride in 2 liters of deionized water as prescribed by the standard. 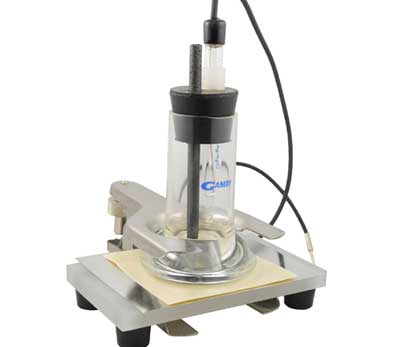 The experimental setup is shown in the setup dialog box below. 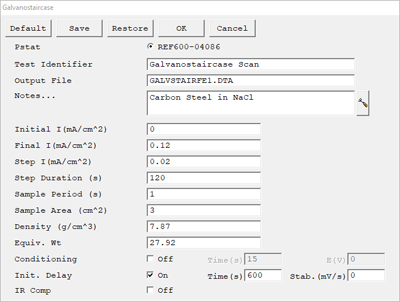 The graph of the potential response of the aluminum alloy (used in the production of aluminum soda cans) to the galvanostatic staircase is shown in Figure 5.  Each galvanostatic step is held for 120 seconds before the next step is applied.  After each step, there is an initial spike in the voltage followed by a decay as the surface reaches a pseudo-equilibrium state.  As the current increases the potential increases in the positive direction.  As the current is reduced the potential becomes more negative again.

To extract the breakdown potential (Eb)and the protection potential (Eprot), a straight line is drawn through the measured potential at the end of each step on the current increase phase and this is extrapolated back to zero current.  This gives Eb (-0.629 V vs. Ag/AgCl) as shown in Figure 4.

A similar line is drawn for the current decrease phase and the line is extrapolated to the end of the last zero current step.  This gives Eprot (-0.656 V vs Ag/AgCl).  The voltage difference between the breakdown or pitting potential and the protection potential is 27 mV.  This value fits into the range mentioned by Foley (2) in their review of different composition alloys.

An experimental script was modified to perform the galvanostaircase experiment as per the ASTM G100 standard.  The experiment was performed according to the standard on an aluminum alloy used in soda cans.  The potential difference between the breakdown potential and the protection potential was 27 mV, in the range reported for similar alloys.

Galvanostaircase is not a standard experiment in the DC corrosion package of the Gamry Framework, but we have created a script for our Version 7 Software that you can download.

If you need this script for earlier versions of our software, please contact Technical Support or email techsupport@gamry.com.