An experiment using a quartz-crystal microbalance (QCM) with impedance (QCM-I) is a unique technique popular in characterizing biological films that are structurally complex. While basic QCM measurements track only the shift in the resonant frequency upon film deposition or growth, QCM-I provides quantitative information on a film’s viscoelastic properties. In this Technical Note, we take a look at example QCM-I data using electrodeposited polyaniline films.

Polyaniline is a great starter film to learn how electrochemistry can be used to form complex films. The monomer is available as aniline∙HCl and is ready-to-use as is without a complex preparative procedure. Simply dissolve the white-colored crystalline solid in de-ionized water (be sure to read the safety data sheet!). Solubility in water is about 107 g/100 mL at 20°C.[1] In our case, we started with a 100 mM solution of aniline∙HCl in water. This solution was loaded into the QCM-I mini EC-flow cell. We removed trapped bubbles and allowed time for the solution to settle. We then applied a constant current of 20 µA. A leakless Ag|AgCl reference electrode was used as reference. The counter electrode was a Pt disk positioned above the electrode. 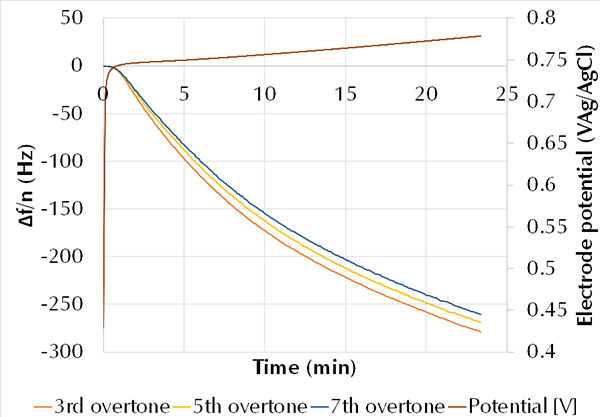 The bandwidth (Full Width at Half Maximum, FWHM) of the quartz-crystal sensor increases when a viscoelastic film is deposited (see Application Note “Basics of a Quartz Crystal Microbalance”). This behavior is captured in Figure 2 where bandwidth only increases after electrodeposition begins (arrow). The bandwidth response of the polyaniline film is complex; we cannot go into detail here. 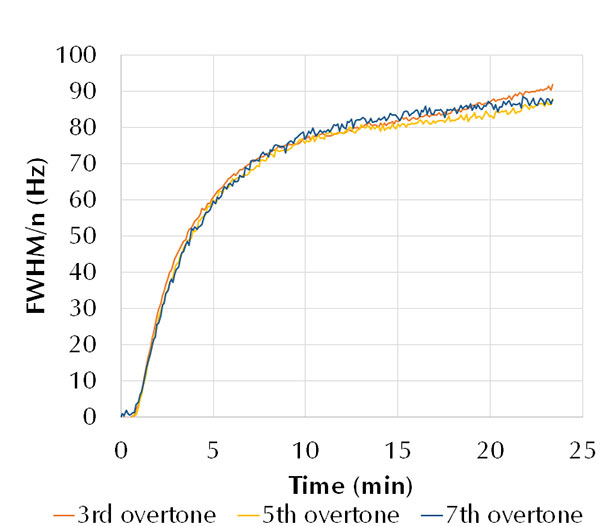 However, to put the response into perspective, we plot the FWHM against the frequency shift for a copper film, polyaniline film, and a theoretical viscous solution in Figure 3. As expected for a thin, rigid film, the copper response is a near-horizontal line—practically no change in dissipation is detected for copper. A viscous solution would exhibit a slope of –2 (see the Technical Note “The Principles of QCM-I”). Viscoelastic films such as polyaniline exhibit a response that varies between a viscous solution and rigid film. 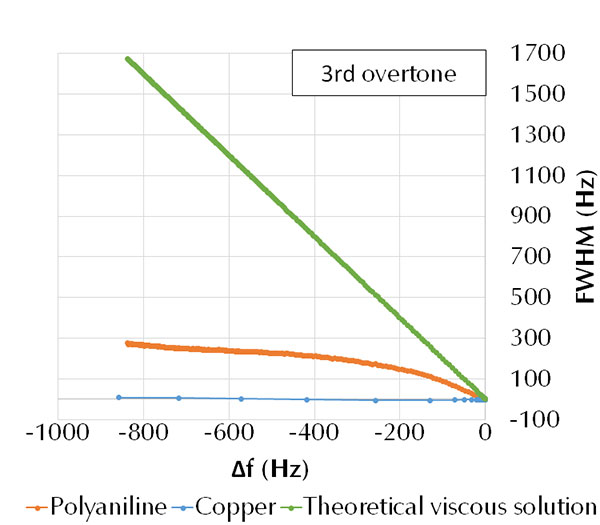 Degassing solutions before QCM-I measurements is important to reduce the detrimental effect of gas bubbles on your experiment. After every experiment, we advise you to inspect the quartz-crystal surface for areas of film exclusion caused by a trapped gas bubble. These areas are outlined in red in Figure 4. 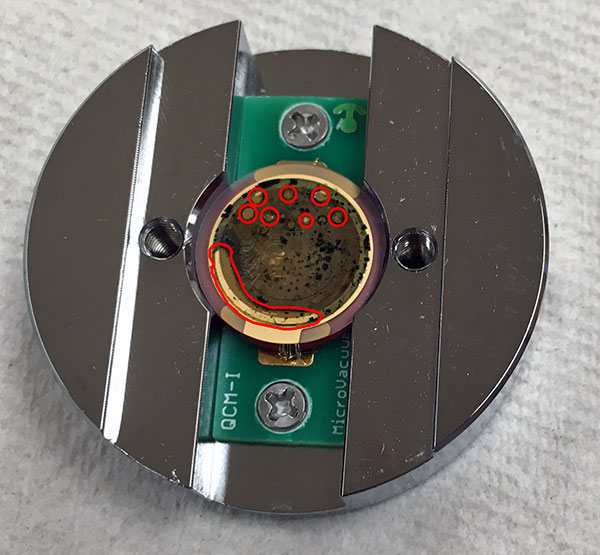 This Technical Note demonstrates the use of QCM-I for studying the deposition of polyaniline. The principles outlined herein can be applied to all sorts of viscoelastic films and solutions. They also offer a way to demonstrate the rigidity of a film when applying the Sauerbrey equation.