This application note is part 2 of a series of notes introducing Gamry’s spectroelectrochemistry system.

Part 2 discusses the spectroscopic experiments in Gamry’s Framework and explains their setup parameters. Data evaluation is shown by using the Echem Analyst. Its new spectroscopy commands are described on the basis of examples.

The following chapters explain in detail various setup parameters and the procedure of all spectroscopic experiments in Gamry’s Framework. Afterwards, data evaluation in the Echem Analyst is explained.

With the exception of Optical Spectroscopy, all experiments combine spectroscopic and electrochemical experiments.

As stated before, Optical Spectroscopy is the only spectroscopic experiment. It records one single spectrum.

This experiment can be used to find suitable setup parameters (e.g. integration time, analyte concentration, or pathlength) for later spectroelectrochemical experiments. Its setup is shown in Figure 2.

The user defines the output file name and the type of data which shall be recorded – “Absorbance”, “Raw Counts”, “Transmission”, or “Dark Subtracted Raw”.

In addition, several measurement parameters can be adjusted. The integration time defines how long the detector will collect light to obtain a single spectrum. Gamry’s spectrometers allow integration times from 1 ms to 65 s.

The “# to Average”‑function defines the number of spectra that are measured and averaged to get a single spectrum. This way, the signal‑to‑noise‑ratio can be increased.

The last two functions define the wavelength range of the spectrum which is shown during the experiment. However, always the whole spectrum is saved.

After starting an experiment, the user is asked if a dark spectrum and a blank spectrum shall be recorded prior to the actual measurement. Several dialog boxes appear and explain how to proceed for every spectrum. Both are automatically subtracted later from the actual spectrum.

The detector measures still a background signal even if no light reaches it. The dark spectrum will be subtracted from the actual spectrum which is then corrected by this noise.

To record a dark spectrum, the measurement cell should be completely darkened so that no exterior light comes in. In addition, the light source should be either turned of or the shutter should be closed.

When analyzing a sample, not all signals from the sample are of interest, e.g. the solvent of the analyte. When measuring a blank spectrum, the final spectrum is automatically corrected by these signals.

The experimental setup should simulate the final experiment. A cuvette that contains the blank solution (e.g. the solvent or just air) is placed in the cuvette holder. Darken the cell if the final experiment is also darkened. Open the shutter and turn on the lamps that are used for the final measurement.

When both dark and blank spectra are measured, the user is asked to put in the working solution and start the experiment. Depending on the spectroscopy type chosen before, either a Transmission or Absorbance spectrum is recorded.

In the case that no blank and dark spectra need to be recorded, only a single raw count spectrum is recorded regardless of the spectroscopy type that has been chosen in the setup.

The dark spectrum is in general identical for all measurements. It strongly depends on the temperature and light source. If you chose the function “Dark Subtracted Raw”, a dark spectrum will be measured before a raw count spectrum. As a result, only one reference spectrum has to be subtracted in the Analyst to calculate the absorbance.

Figure 3 shows a screenshot of an absorbance spectrum displayed in Gamry’s Framework during an Optical Spectroscopy experiment. The spectrum is from Methylene Blue in a solution of potassium nitrate (KNO3). The integration time was set to 0.1 s. The spectrum shows typical absorbance peaks at about 245 nm, 291 nm, 610 nm, and 660 nm. Hence the violet, yellow, and red portion of the electromagnetic spectrum’s visible part is mostly absorbed resulting in the intense blue color of Methylene Blue.

The SPECTRO software package allows the user to perform electrochemical and spectroscopic experiments simultaneously. These measurements include:

All four experiments are similar to the non‑spectroscopic experiments of the PHE200 software package. The setup window includes some extra lines for setting all spectroscopy parameters (see Figure 4).

Figure 4 – Section of the setup window for a spectroelectrochemical experiment.

Similar to Optical Spectroscopy, the user can record a raw count, absorbance, or transmission spectrum while performing an electrochemical experiment. All additional spectroscopic parameters can be set in an extra setup window.

When both measurements are started, two separate windows open in Framework – the first shows the electrochemical experiment, the second one the spectrum.

Recording a spectrum starts first when the electrochemical experiment starts. That means that during pre‑conditioning and OCP measurement no spectrum is measured. The graph of the spectrum is updated each time a whole spectrum is recorded. The duration depends on the integration time which is set in the Optical Spectroscopy experiment.

After the electrochemical experiment is finished, a last spectrum is recorded and the spectroscopy measurement stops, too.

The electrochemical output file uses the name that was chosen in the experimental setup. The format is similar to non‑spectroscopic experiments in the PHE200 software package.

The tag which is specific for an experiment is varying for spectroelectrochemical experiments. It determines the menus in the Echem Analyst which contain commands and tools for data evaluation. Table 1 shows all experiment‑specific tags.

In addition, the output file includes one extra line:

When opening an electrochemical file in the Echem Analyst, corresponding spectroscopic data are automatically added within a new tab.

When opening a single spectroscopy file, only spectroscopic data are shown in the Echem Analyst.

The next section will explain each command and its functioning with examples.

The command Add Wavelength Slices enables the user to select specific wavelengths and display the temporal progress of spectroscopic data (absorbance, raw counts, or transmission) in a new graph.

An example is shown in Figure 6. It shows five absorbance spectra at different times (1 min, 20 min, 40 min, and 60 min – from darker to brighter) which were recorded during a spectro‑chronoamperometric experiment.

The temporal progress of absorbance during this experiment can be visualized by using the command Add Wavelength Slices. When selecting the command, a separate window opens where the user can define up to four wavelengths at a time (see Figure 7).

After pressing OK, a new tab opens in the Echem Analyst showing the graphs for each wavelength (see Figure 8). 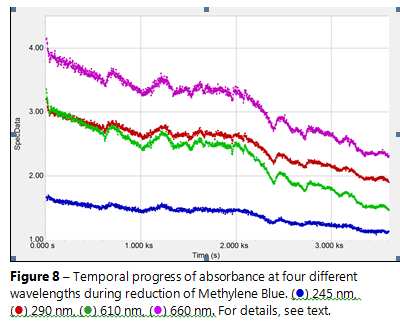 Repeating the command Add Wavelength Slices will add further plots to existing ones. Less than four wavelengths can be plotted by setting a wavelength to zero.

The command Subtract Spectrum allows the user to subtract a spectrum from a current one. Requirement is that the data type (i.e. absorbance, raw counts, or transmission) are is the same.

Figure 9 shows a CV and absorbance spectra at different potentials (from darker to brighter) starting from the oxidation peak.

The electrolyte is 5 mM potassium ferricyanide (K3[Fe(CN)6]) in 10 mM potassium chloride (KCl). The spectro‑cyclic voltammetry experiment was performed on a platinum mesh electrode versus a Ag/AgCl reference electrode.

Figure 10 shows relative changes of absorbance at the same potentials.  For this, the initial cycle was subtracted using the command Subtract Spectrum. During the measurement Fe(II) is oxidized to Fe(III). Absorbance is decreasing at about 230 nm and 260 nm while it is increasing at 300 nm and around 420 nm.

The whole process is reversible. For reasons of simplifications, the reduction step is not shown. All spectra are slightly smoothed using the tool Smooth Data due to noise during the measurement.

The user is asked to open a spectroscopy file with raw count data which is then automatically converted into an absorbance spectrum in the Echem Analyst.

The Peak Find command enables the user to find all peaks in the selected portion of a spectrum.

First, a region of the spectrum has to be selected by using the tool Select Portion. By using the command Peak Find, all peaks (maxima for absorbance and raw count spectra and minima for transmission spectra) are highlighted and numbered. A detailed table is generated in a new tab which sums up all relevant peak data.

Figure 11 shows an absorbance spectrum of Methylene Blue in KNO3 with all highlighted peaks. Figure 12 shows the according table. Figure 12 – Table of peak locations for the spectrum shown in Figure 11.

The Peak Find command uses an algorithm which is searching for changes in the slope. It makes a linear fit for a pre‑defined range and compares signs of slopes. Pseudo‑peaks due to noisy measurements are filtered out by the algorithm as far as possible.

The Clear Peaks command clears all peak information generated by the Peak Find command. The list containing all peak data is deleted.

This note is part 2 of a two‑part application note series. It explains execution and data evaluation of spectroelectrochemical experiments.

Framework’s experimental setup for spectroscopic and spectroelectrochemical measurements is shown and important parameters are discussed. The measurement procedure and the output file format are explained.

Finally, data evaluation in the Echem Analyst including a detailed description of each spectroscopy command is shown by means of examples.