In this type of scan, the potential drives the reaction at the anode or cathode. What we observe is the overall change in the rate of reaction (the current). That is, the potentiostat records the applied current to the cell that provides the increase in potential. The potential where the total anodic current equals the total cathodic current is the open-circuit potential (Eoc). (See Figure 1.) 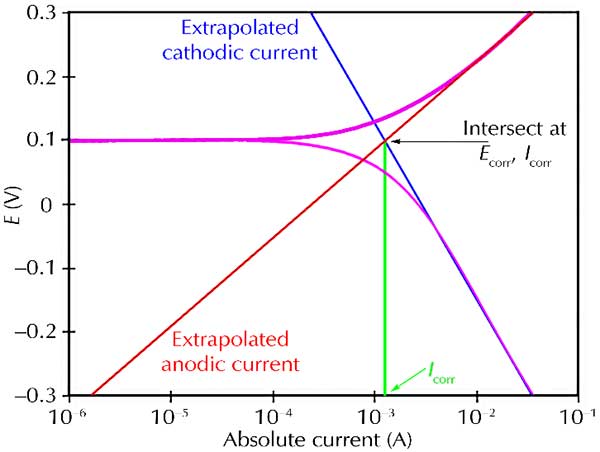 The potential is swept across a range and the current is measured. For an anodic scan, researchers often start slightly cathodic of the open-circuit potential, and for a cathodic scan, the starting point is often slightly anodic.

A cyclic polarization scan is performed like a potentiodynamic scan, but with an addition: the voltage is swept across a range, but then reversed back to the starting potential. This allows a return to the original potential. The surface is likely to be changed by the reactions during the scan, so often the data from the return voltage sweep do not superimpose upon the data from the forward sweep.

A typical set of potentiodynamic data may be plotted like this (Figure 2): 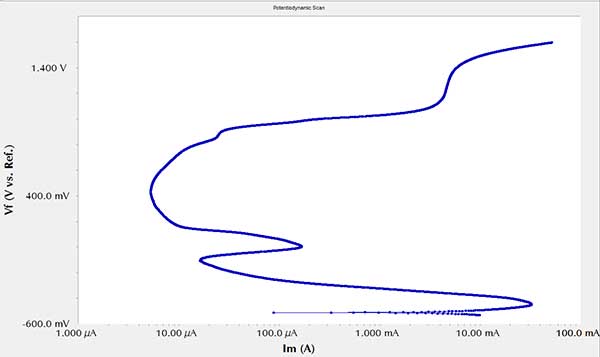 This scan of a stainless-steel sample in sulfuric acid can be interpreted as follows: 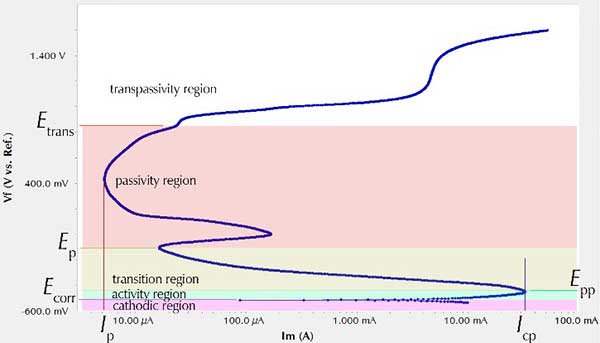 As the voltage is increased from about –550 mV, the current drops in the cathodic region (purple) to a minimum at the Ecorr, then rises again in the activity region (green) where oxidation of the metal occurs. A maximum is reached at the passivation potential, Epp. The current drops again in the transition region (yellow) and then remains at a fairly constant, low level in the passivity region (pink). Breakdown of the surface, which may be pitting or dissolution at the surface, initiates just above 600 mV.

Note the area around Ecorr, which is similar to the (expanded) idealized view in Figure 1.

Gamry Instruments’ potentiostats are sensitive enough to detect current down to picoamperes, as shown in Figure 4.

In Figure 4, there is no major electrochemical activity on the sample itself—most likely this is just oxidation of water.

As mentioned earlier, the electrochemical changes in these scans can result in permanent or destructive alterations in the sample’s surface. Cyclic polarization scans show examples of this. 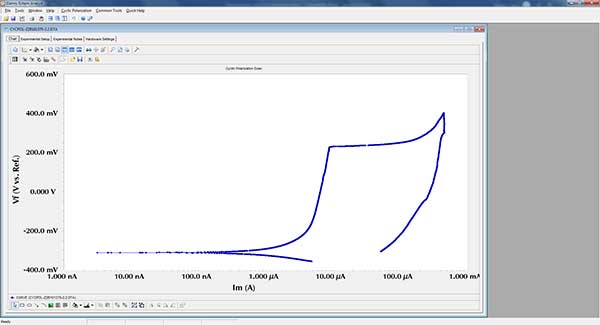 Yet another cyclic polarization data set (Figure 7) with pitting and repassivation: 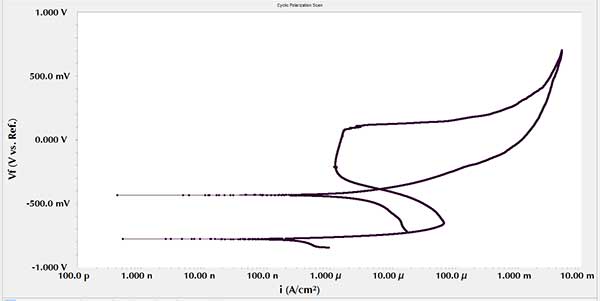 Potentiodynamic and cyclic polarization scans have the ability to illuminate a variety of corrosion-related phenomena, using Gamry Instruments potentiostats.