Hybrid Electrochemical Impedance Spectroscopy (EIS) is a galvanostatic impedance spectroscopy experiment that can be used for samples that have impedances that change significantly with frequency.  It has the advantage over galvanostatic impedance measurements that the current is adjusted as the impedance changes at each frequency.  It is of particular use for energy storage devices like batteries and supercapacitors which have low impedances making the selection of the required ac current problematic.

Implementation in the Gamry Framework

Hybrid EIS experiments are available in the Gamry Framework and the Gamry Sequence Wizard.

As with most impedance experiments, the first parameters are the frequency range for the experiment, the initial and final frequencies, and how often you wish to sample the frequency response, points per decade.  Next, we need to select the amplitude of the AC signal.  The requested value is in mV, but this is a galvanostatic experiment, so the software will calculate the required AC current.  This is done from the value of the Estimated Z (estimated impedance) that you enter for the initial frequency in the experiment.  DC current is the next parameter which would normally be set to zero if maintaining the current state of charge of the battery.  Finally, there are 3 choices for the speed of the experiment.  The “fast” option is to used to get an initial quick assessment of the impedance spectrum of your device.  “Normal” is the choice for most people and “Low Noise” is if you are measuring small signals (either current or voltage).  The “Low Noise” option takes longer to perform the experiment.

The software has some internal limits to give the user guidance when the applied current signal may be too small or too large.  One of the error messages that may pop-up is shown in figure 2.

Figure 2. Error Message when signal is too small.

Figure 3 shows the error message if the current required is too large for the potentiostat that you are using. Remember, this is the calculated current so you would change in your input parameters. Either decrease your AC Voltage amplitude, decrease your initial frequency, or re-examine your Estimated Z. General suggestions for Estimated Z would be 1 Ohm for a coin cell, 0.1 Ohm for a cylindrical cell and larger cells. 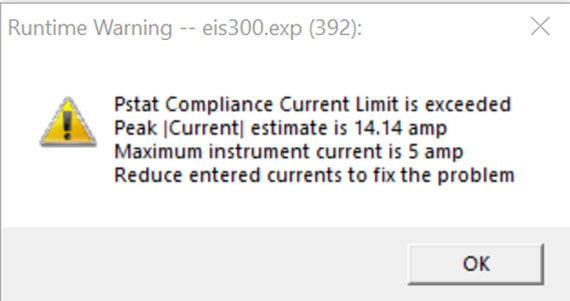 Figure 3. Error message when the calculated current is too big.

Comparison of Hybrid and Potentiostatic EIS

An overlay of the 2 spectra (Figure 5) shows minimal differences between the 2 experiments.

Hybrid EIS is a useful alternative to Potentiostatic EIS under conditions or for devices which make Potentiostatic EIS difficult to perform.  The experimental parameters and some of the limitations are indicated and a comparison test shows minimal differences between the two methods for an 18650 battery.