This application note discusses Raman spectroscopy and its combination with electrochemical techniques.

Raman spectroscopy is a widely used spectroscopic method. Highly specific spectra of materials can be obtained which can be compared and identified by using spectral databases. Similar to IR‑spectroscopy, fundamental vibrations of molecules are examined which is important for a complete understanding of chemical reactions.

However, in contrast to IR‑spectroscopy, no absorption effects are observed but scattering of light. As water is a strong absorber, Raman spectroscopy is the method of choice for studying aqueous solutions compared to IR‑spectroscopy. This makes it suitable for biological and medical research, e.g. analysis of the impact of drugs on biological cells.

Raman spectra can be acquired very fast. Hence it is used for a large variety of in‑situ analyses. Further, it is in general a non‑destructive technique depending on the intensity of the laser and duration of an experiment.

The experimental setup is simple as no sample preparation is necessary. Solid or liquid samples can be used as they are received. Experiments can be performed either inside or outside of a measurement cell through glass or plastic.

When light is focused on matter, both interact in different ways with each other. Light can be absorbed, scattered, transmitted, or reflected amongst other effects which would go beyond the scope of this discussion.

In 1828, the Indian physicist Sir C. V. Raman performed a series of measurements where he focused sunlight on a liquid probe (see Figure 1). 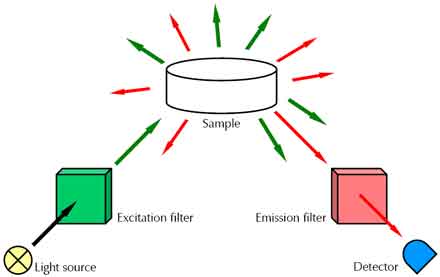 He used a monochromatic filter (excitation filter) which let only light with a specific wavelength reach the probe. The measured scattered light showed a broader spectrum with additional wavelengths. A second filter (emission filter) behind the probe allowed blocking the incident wavelength. The observed residual scattered light could now be clearly distinguished from the incident light.

The observations which Sir Raman made can be explained by the fact that photons which are not absorbed by the probe will be scattered.

In UV-Vis absorption spectroscopy, electrons in the ground state are excited to a so‑called excited electronic state. For this, the photon energy (depending on the wavelength) has to match the difference in the energy states. As a result, those absorbed wavelengths cannot be found in the transmitting light.

When light is scattered, electrons are also excited from their ground state. However, the photon energy is does not have to be resonant. Molecules can be excited to a virtual energy state, see Figure 2. 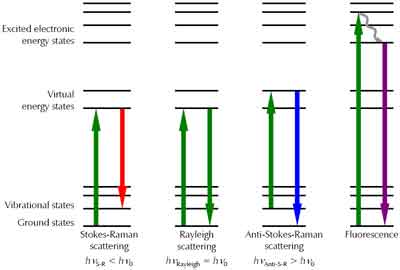 Scattered light itself can be distinguished between elastic and inelastic scattering. The major part scatters elastic which means that the energy (i.e. wavelength) of the incident light is equal to the emitted light. This phenomenon is referred to as Rayleigh scattering.

Only a minor part scatters inelastically where a small fraction of energy is transferred between molecule and photon. It causes changes in the polarization of the molecule which are induced by molecular vibrations. Hence energy and wavelength of incident and scattered light are not equal anymore. This effect was observed by Sir Raman in his experiments which were described in the previous section. As a result, this kind of spectroscopy is called Raman spectroscopy.

Inelastic scattering can be further distinguished between two different forms, depending on the energy state of the molecule (see Figure 2).  In case one, the molecule is initially in its ground state. After excitation, the molecule falls back to a vibrational energy state above the ground state. As a result, the emitted photon has less energy than before and the scattered light will shift to a higher wavelength. This effect is called Stokes‑Raman‑scattering.

The second type of inelastic scattering assumes that the molecule is already in a higher vibrational state. After excitation, the photon falls back to the molecule’s ground state. The emitted photon has a higher energy than before. The wavelength shifts to lower values. This effect is called Anti‑Stokes‑Raman scattering.

Figure 3 shows a general setup for spectroscopic and spectroelectrochemical Raman experiments. It consists of a Raman spectrometer, measurement cell, potentiostat, and computer.

The light source of a Raman spectrometer is in general a laser with a specific wavelength. The laser’s wavelength can range from the Ultraviolet to the visible and near-Infrared range depending on the application. 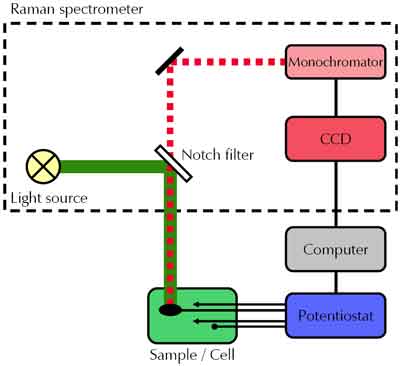 The light beam is focused on a dichroic filter (Notch filter). The filter reflects the light beam to the sample at a right angle. The resulting Raman scattering is focused back to the dichroic filter. It serves as band‑stop filter whereby the incident light from the light source is nearly completely attenuated. Only light with a different wavelength, i.e. Raman scattered light, can pass the filter unaltered.

The measured light is redirected by mirrors to a monochromator which uses grating to diffract the beam into a narrow band of wavelengths. The photo current from each wavelength section is then measured at the detector. In general, a CCD detector (charged‑coupled device) is used to the measured photo current into electric current. Finally, the measured data can be saved and evaluated on a computer by using appropriate software.

The following sections describe the interface of Gamry’s Framework. All relevant parameters which can be set for spectroscopic Raman experiments are explained. Further, a practical example of a chronoamperometric Raman experiment is shown.

The Laser Power is given in percent. The signal intensity increases with increasing power level. However, higher laser power can alter or destroy the sample.

If the Advanced Spectrometer Setup is checked, an additional window appears after pressing “OK”. This setup gives the user the possibility to adjust additional settings.

The first line adds an average function. When measuring, multiple Raman spectra are recorded and averaged to one spectrum. This method increases the measurement time and leads to a longer exposure time of the laser. However, signal‑to‑noise ratio and the resolution can be improved. In addition, cut off peaks can be avoided.

This section discusses Raman experiments with PEDOT:PSS (Poly(3,4-ethylenedioxythiophene)-poly(styrenesulfonate)). This conductive polymer is mostly used in LEDs as hole-injection layer.

Figure 5 shows Raman spectra at different potentials during several chronoamperometric experiments with PEDOT:PSS. The polymer was applied on a metal surface as thin film. An aqueous solution of sodium sulfate served as electrolyte. The electrolyte was nitrogen‑purged before measuring. Graphite was used as counter electrode and a Ag/AgCl electrode was used as reference electrode.

The integration time was set to 20 s and five spectra where averaged, resulting in an exposure time of 100 s for each saved spectrum. The laser power was reduced to 50 %. 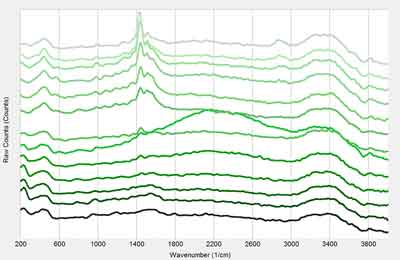 Figure 5 – Raman spectra of PEDOT:PSS at different potentials from 0.6 V to -0.6 V (bottom to top) during chronoamperometric Raman experiments.

Literature research[1] reveals that the strong peak at 1447 cm-1 can be assigned to ring C‑C stretching vibrations from PEDOT. The negative shift can be assigned to an increase in the conjugation length of oxidized parts to their neutral state during reduction.

Reduction of PEDOT can lead to reduced efficiency and long‑term stability of LEDs. During operation of LEDs, electrons are withdrawn from PEDOT and form electron holes in the polymer layer. Vice‑versa, electrons are injected into the electron‑transporting layer near the cathode. Recombination between electrons and electron holes lead then to emission of radiation. However, recombination does not always occur. Electrons can migrate to the PEDOT‑PSS layer and reduce PEDOT.

By combination of electrochemical techniques and Raman spectroscopy, more information can be obtained simultaneously. These can be combined to get a detailed description of reaction mechanisms.

This application note describes the theory of Raman spectroscopy. The setup for Raman experiments including its extension to spectroelectrochemical measurements is described. Gamry’s Raman interface and important setup parameters are discussed by means of chronoamperometric Raman experiments.

The effect of electrochemical reduction of PEDOT:PSS – a conductive polymer which is used in LEDs – is discussed. The measurements show that Raman spectroscopy in combination with electrochemical techniques is a helpful tool to investigate changes in the electronic state of molecules during electrochemical processes.

Structural information can be obtained for better understanding of different reaction mechanisms. Highly specific Raman spectra exhibit detailed information about the current system. By using spectral databases, materials can be compared and identified.