Electrochemical Impedance Spectroscopy (EIS) measurements are more often performed in potentiostatic mode than under galvanostatic mode. The reason is partly convention and partly driven by materials. For example, coatings and corrosion-resistant materials have a higher impedance, so that the application of a 10 mV sine wave results in a nA (or smaller) response. Conversely, in a low-impedance device such as a large supercapacitor or battery, the application of a 10 mV sine wave produces amperes of current-flow, possibly changing the state of the device—or worse, yet, damaging it. For devices with intermediate impedance (e.g., smaller batteries, smaller supercapacitors, and sensors), either potentiostatic or galvanostatic modes may be used.

Usually potentiostatic and galvanostatic modes are equivalent and give the same impedance diagrams. But sometimes−if the system evolves during the measurement−results from the two techniques may differ.

Under galvanostatic control, drift is not a problem, for the desired zero-current condition is maintained throughout the experiment, ensuring that the measurement is performed at the true corrosion potential[1]. In battery applications, determining the variation of internal resistance during discharge/charge is often worthwhile. Here, use of galvanostatic mode in EIS measurements[2] may be better. The battery voltage changes with time during discharge, rest, and potentiostatic and galvanostatic EIS measurements. An example of a non-linear discharge is shown in Fig. 3. 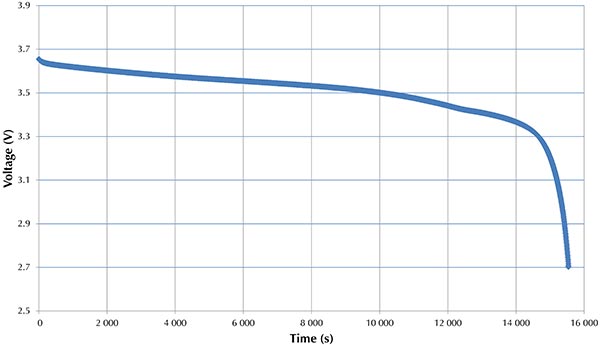 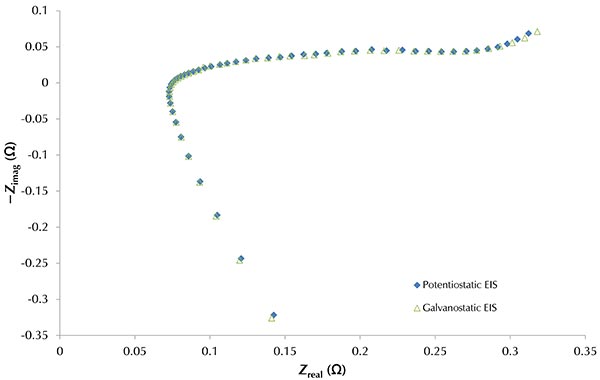 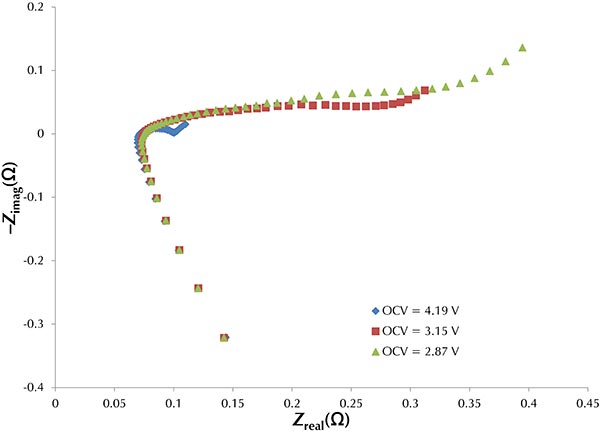 The change of internal resistance with the potential or State of Charge (SoC) is studied by EIS measurements during discharge (or charge). This resistance is determined by fitting the EIS graphs to an equivalent model circuit (constructed in Gamry’s Model Editor) in Gamry’s Echem Analyst™. Gamry’s Model Editor and Echem Analyst software provide a powerful, user-friendly tool to analyze the successive impedance measurements: Impedance Fit by the Simplex Method. In this method, the user clicks the AutoFit button to let the software iterate automatically, converging on the best fit to the data, and then superimposing the fit on the data. Fig. 6 shows the result of the fitting process (ignoring inductive effects of the cables) for the 18650 cell (Li-ion) for the potentiostatically-controlled experiment with the equivalent circuit (Fig. 5).

Figure 5. Equivalent circuit diagram from Gamry’s Model Editor, used to model the cells, with parameters attached to each element. The “null” symbol (Ø) represents a constant-phase element, and W indicates a Warburg circuit element. 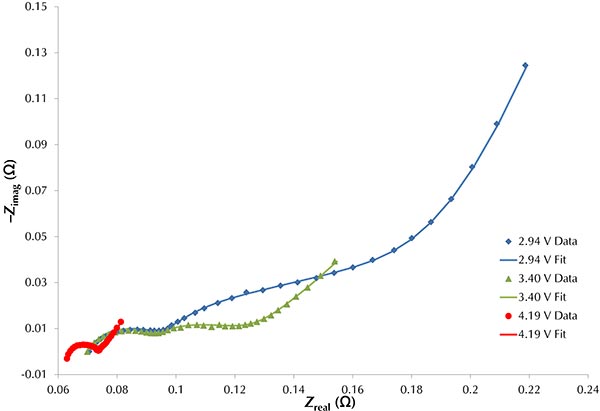 As with the 18650 cell, the coin cell’s voltage changes with time during discharge, rest, and potentiostatic and galvanostatic EIS measurements. Another example of a non-linear discharge is shown in Fig. 7.

Figure 7. Plot of voltage against time of coin cell during C/10 discharge. 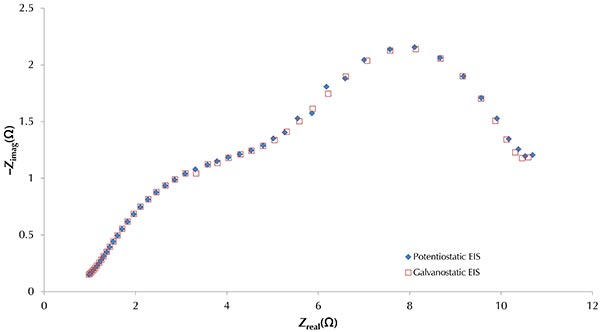 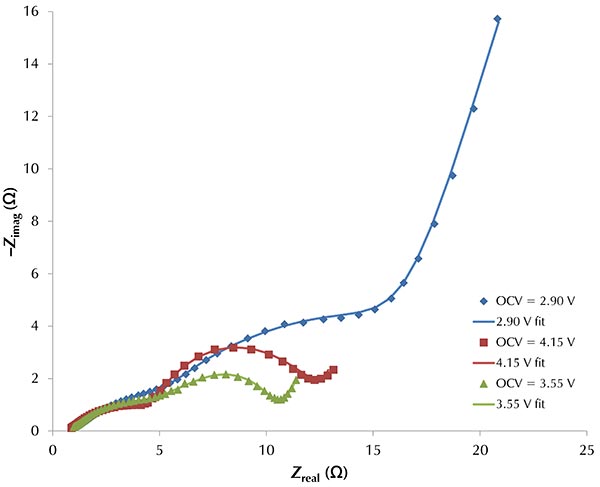 Upper: Nyquist plot of a coin cell under potentiostatic control (blue diamonds) and under galvanostatic control (hollow red squares), both taken at a potential of 3.55 V.

The upper graph in Fig. 8 compares a potentiostatic EIS to a galvanostatic EIS scan. Because they are practically coincident, we can conclude that either method works for this system.

The lower graph in Fig. 8 shows the potential-dependency of potentiostatic EIS for three different open-circuit potentials. Fits (according to the model in Fig. 9) are represented by hollow points, and they match the data excellently.

Gamry Instruments’ potentiostats are ideal for collecting many types of EIS data. EIS experiments in potentiostatic or galvanostatic mode are usually equivalent. For batteries we generally recommend a current amplitude of, at most, about 5% of the standard charge current as listed in the manufacturer’s specifications. One can also use (as a rough approximation) the value of the current modulus obtained from the potentiostatic EIS measurement.