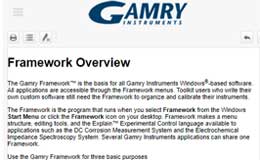 One feature that is unique to the Gamry Instruments Software is the concept of "Open Source Scripting." This means that the flow and control of your experiments is under your control. If one of Gamry Instruments' standard scripts doesn't quite do what you want, you may find that performing your customized experiment is only a few keystrokes away. This document will point out how easy it is to make some commonly requested changes.

This document will not teach you the Explain™ scripting language. If you want to know more about the Explain scripting language, read Customizing Electrochemical Experiments Explain™ or Programming Reference for Explain™. You can also call and ask us for them. For detailed on-line help, simply start the Gamry Framework™ program and click Help!

If you need more extensive changes and don't have the time to write the script yourself, contact Gamry Instruments. We'll be happy to discuss your unique application and tell you what it will take to have one of our engineers write a custom script for you.

The changes that we will discuss here are:

For example, if the standard size of samples in the laboratory is 3 cm2, the following change could be made to the Polarization Resistance.exp script. (changed items are highlighted for clarity)

Would be changed to:

This would change the default value for the Area to 3.0. Since Version 4.0 remembers the last value entered, what you generally will see is the last value that you entered. However, with this change made to the QUANT.New statement, pressing the Default button while running the modified script will reset the area to 3.0 cm².

2. Changing the Wording of Items in the Setup Window

The descriptive text that is displayed in the setup box is also assigned to objects when those objects are created. Therefore, modifying the prompt string (usually units of the object) is done when the object is created. For example:

Could be changed to:

3. Removing Items from or Adding Items to the Setup Window

The setup window provided in an Explain™ script may contain information that is irrelevant to you. In that case, you may want to modify the script to remove items from that screen. The easiest way to remove items from the setup window is to comment them out using a semicolon ( ; ) in the Setup() function. For example if you want to completely remove the Notes field from the setup box the following change converts the entire line specifying notes into a comment.

Adding items to the setup window is a three-step process:

For example, you may want every sample run to have a unique sample identification number. In the object definition section of the script add the following line:

Finally the information stored in the SampleID object should be written to the data file by adding the line below. Note: for clarity this line should be added in the section of the script that contains the other Printl () functions.

The function call Cv.FlipAxis(X_AXIS, TRUE) is responsible for flipping the axis to the left-positive mode. If this line is turned into a comment by placing a semicolon ( ; ) at the start to make the line merely a comment and to restore the more commonly used right-positive convention.

To move the measurement of the open circuit potential to before the conditioning step the following lines:

Should be rearranged to measure the open circuit potential first:

The open circuit value may have no meaning for some experimental systems. You may wish to completely eliminate its measurement. Unfortunately even if the open circuit measurement is deleted, the user can still select potentials versus open circuit in the setup window. The Explain script must be modified so that not only is the measurement of open circuit removed, but the open circuit potential must be set to a value of 0.0 for all POTEN (Potential) class objects. The following changes would be made to the script:

The control of hardware settings on the potentiostat is available in the function InitializePstat(). This function is usually defined at the end of an experimental script so that the user can quickly find the hardware controls and modify them as needed. For example, assume that the user is performing an experiment where the scan rate is sufficiently fast that a 5.0 Hz filter on the current causes distortions in the measured response. The following change would be made in the InitializePstat function.

Changing the value of 5.0 to 100.0 would instruct the potentiostat to select the current channel filter appropriate to allow a signal of 100.0 Hz to pass through without any distortion. On a PC4™ potentiostat, the filter actually selected would be the 1 kHz filter since it is the lowest filter available which will not distort a signal of 100.0 Hz.

The user may want to add a "stop data acquisition" criterion to an experiment. The limit criterion will either trigger an end of an experiment, or to move on to the next section of the applied SIGNAL object. It is easily implemented by simply enabling the termination limits of the CURVE class object! In the example of the Polarization Resistance.exp script, the CPIV class of CURVE is used. There are 6 limiting conditions on which a CPIV curve may be prematurely terminated. Any combination of stop criteria can be combined in the following function:

The following changes should be made to the script to enable a stop data acquisition criteria based on a limiting current density. In this example we must be careful since the StopAt function only accepts limits in amperes, and we wish to enter a value in mA/cm²

First, an object must be created to store the limiting current density value. The following code should be added to the object definition section of the script.

The Cpiv function definition in this script must be changed so that it accepts an ILimit value (in amps) as the seventh in the calling sequence.

Finally, after the Curve object has been created the stop acquisition limit must be enabled using the StopAt function of the CURVE class..

It is often convenient to control an external device with a voltage from the auxiliary output of the Gamry Potentiostat. You can use this voltage to control rotating disk electrodes, scratch devices, or other mechanical devices.

In the case of a rotating disk electrode, you might enter a value for the rotation rate in RPM in the setup box and have the Explain™ script convert that value to a voltage. The following lines of code should be added to the script. First we would add to the object definition section an object that would be used to store the rotation value.

In this example, the rotating electrode used has a conversion factor of 1000 RPM per 1V input to the rotator. Therefore the RotSpeed (RPM) is divided by 1000 to get volts. This conversion statement must precede the function that actually sets the analog output.

The value of the voltage (RotationVoltage) is output to the analog output on the potentiostat using the Pstat.SetAnalogOut function. Placement of this code in the script is important. You may want the rotator to start rotating before the condition step, before the measurement of open circuit potential, or before the application of the applied waveform. Therefore, you should place the Pstat.SetAnalogOut function in the script accordingly.

; Set the output DAC to the Rotation Voltage
Pstat.SetAnalogOut (RotationVoltage)

Finally the analog output should be set to zero so that the rotator stops at the end of the experiment. This is usually done immediately before the Pstat.Close () in the script.

In some cases, you may want to string several experiments together to form a complicated series of experiments. These sequences may also include time delays (i.e., wait for 30 minutes) or time triggers (i.e., wait until 10:00 a.m.).

Note that the use of an "if" statement before the LaunchWait() test requires that the experiment was successfully completed before moving on the next experiment.

The AutoScriptFile must be an auto script, which will be discussed below. The SetupFile and SetupName are created by saving setup information using the save button in the setup window generated by the regular script. For example, the setup information for an automated polarization resistance experiment would be saved using the setup box from the Polarization Resistance.exp script. OutputFile is the name of the data file that will be created. PstatNo is the designation of the potentiostat in the computer that should be used to run the experiment (1 through 4 are available options; 1 is the default for a single potentiostat in a computer). ChannelNo is the channel on the ECM8™ multiplexer that will be used: A value of NIL is used when no multiplexer is present.

Auto scripts are experiments that must be launched by a master script. The major difference between an auto script and the corresponding normal script is that the auto script is designed to run with minimal operator interaction. Instead of asking the operator to supply experiment parameters, the parameters are read from setup files. You'll need to create setup files for each type of experiment to be performed. In addition, warning messages and queries requiring user input are avoided so the sequence does not pause waiting for an "OK". The Auto scripts are easy to find: The filenames all begin with AUTO!

You can create your own specialized auto scripts or use the auto scripts that Gamry Instruments has added to the application packages. Both original and automated versions must create the same data file formats so the analysis routines will work with data files from either one.

The Explain™ scripting language provides an unrivaled degree of flexibility in customizing experiments while preserving a simple point-and-click interface. Standard experiments provided by Gamry Instruments can be performed with the click of a button. More complicated experiments may be created from the scripts provided with the Gamry system by copying those scripts and making small modifications. The Explain scripting language and user-accessible object-oriented scripts provide an easily modified platform for electrochemical experiments.