Gamry Introduces a New Potentiostat to Their Line of Electrochemical Instrumentation

Gamry Instruments has released a new potentiostat, the Interface 1010, to their complete line of electrochemical instruments. 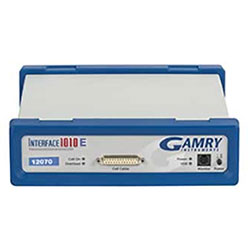 All Gamry potentiostats are electrically isolated from ground and the new Interface 1010 is no exception. A floating potentiostat is able to make measurements on earth-grounded electrodes or multiple working electrodes in a shared cell. The Interface 1010 is available in three models.  The 1010E is a full-featured potentiostat capable of performing all techniques including electrochemical impedance, the 1010B has the ability to run basic physical and electroanalytical techniques and the 1010T Teaching unit.

New features of the Interface 1010 include a built-in temperature monitor using an RTD (Resistance Temperature Detectors) probe, and the 1010E has higher EIS frequencies with EIS measurement to 2 MHz.  Gamry’s pricing on the new potentiostats will be the same as the already reduced pricing had been on the 1000 series.  For more information and the complete specifications, you can visit the Gamry Website – www.gamry.com.

Since 1989 Gamry Instruments has been manufacturing high quality electrochemical instrumentation with uncommon value and performance.  Gamry takes pride in offering top notch support before and after the sale with a sales and support staff consisting of electrochemists and engineers with real-world research experience.