the transmission electron microscope (TEM). Researchers can probe complex processes, such as lithium-ion batteries, fuel cells, and corrosion in order to better understand the fundamental mechanisms and develop new materials. The Poseidon system includes a dedicated in situ microfluidic TEM holder, Gamry Reference 600+ potentiostat and syringe pump. Samples are contained in a liquid environment between a large and a small microchip (called E-chips™). In order to simultaneously acquire electrochemical data and images in the TEM, a three electrode circuit, which includes a working, reference and counter electrode, is integrated into an E-chip loaded in the tip of the TEM holder

In partnership with Gamry, the Poseidon system has been designed with a number of unique elements that resolve the small currents expected in a miniature cell while maintaining imaging and analytical data collection. Contacts in the TEM holder and a protective coating on the E-chips both prevent the electrolyte from reacting with any parts of the cell except the electrodes.

An example of true quantitative electrochemical studies in an electron microscope has been accomplished by L. Mehdi and N. Browning at the Joint Center for Energy Storage Research at Pacific Northwest National Lab in Richland, WA used the Protochips Poseidon system to observe the charge/discharge process of lithium-ion batteries in solution using scanning TEM (STEM). The Poseidon system enables researchers to image and quantify the growth and evolution of the SEI layer as well as the resulting formation of lithium dendrites on the surface of the anode during successive charge/discharge cycles.
A series of real-time STEM images of the working electrode (WE) was acquired as the electrochemical potential of the cell was simultaneously cycled from 0 to -4 volts. At the start of the first cycle, the surface of the platinum working electrode is pristine and all the lithium is dissolved in the electrolyte solution. As the battery is charged, lithium is deposited on the surface of the working electrode and surface roughening is observed as the lithium is not deposited in an even layer. Discharging of the battery during the first cycle leads to a reduction in lithium on the electrode surface, however lithium dendrites remain on the surface of the electrode and do not redissolve in the electrolyte. This process is continued in cycles two and three, and each subsequent cycle leads to an increase in the number and size of the lithium dendrites on the electrode surface. 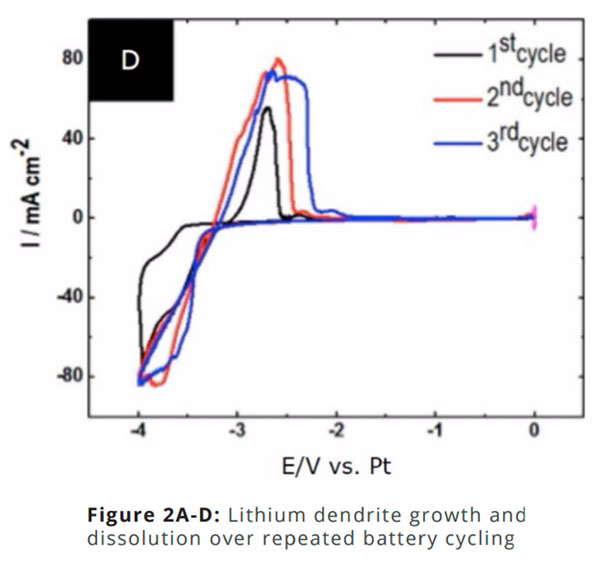