This Application Note is intended to provide the reader with a general framework for characterization of an electroactive polymer film. Electropolymerization is a convenient way to control film growth either through repeated cycling, potential steps, or current steps. Examination of the film redox behavior in monomer-free, fresh electrolyte provides insight on doping and dedoping of these polymer films.

Polybithiophene films were assembled by cycling an Au-coated 10 MHz quartz crystal between 0 and 1.5 V in the presence of 1 mM bithiophene solution containing 100 mM tetrabutylammonium perchlorate (TBAP) in acetonitrile (MeCN). Potentials are reported against a Ag|Ag+ pseudo-reference electrode. The PTFE cell was outfitted with a PTFE O-ring to prevent swelling from the acetonitrile and placed inside a VistaShield™. The cell was connected to an eQCM10M™ Quartz Crystal Microbalance which was coupled to a Reference 600+™. Both instruments were connected to a computer running Resonator™ software. Bithiophene electropolymerizes via a two-electron oxidation at potentials greater than ~1.25 V versus a Ag|Ag+ pseudo-reference electrode.

Figure 1 shows two cycles of film growth. Cycle 1 (blue curve) shows only background (non-Faradaic) current until the potential is greater than 1.25 V. Cycle 2 shows additional Faradaic current beginning at approximately 0.75 V due to oxidation of the polymer film. Polymerization still happens at potentials greater than 1.25 V. The small spike at 1.1 V is related to an irreversible film rearrangement, for subsequent cycles (seen when thicker films were prepared) show no current spike. 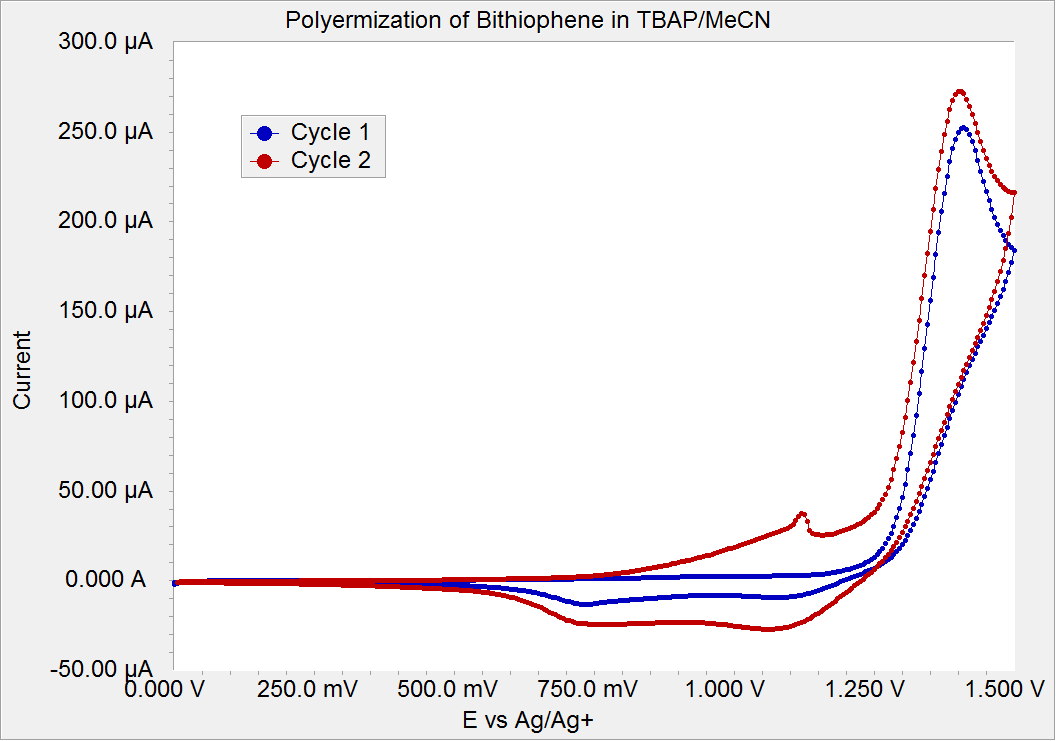 After the film was deposited, the cell was washed with MeCN and then refilled with monomer-free electrolyte. Cycling of the polymer film revealed a broad-shaped couple at approximately 1 V (Figure 2). Mass increases during oxidation and decreases during reduction, respectively, yet does not return to the initial value indicating some loss of solvent, electrolyte, or polymer film. 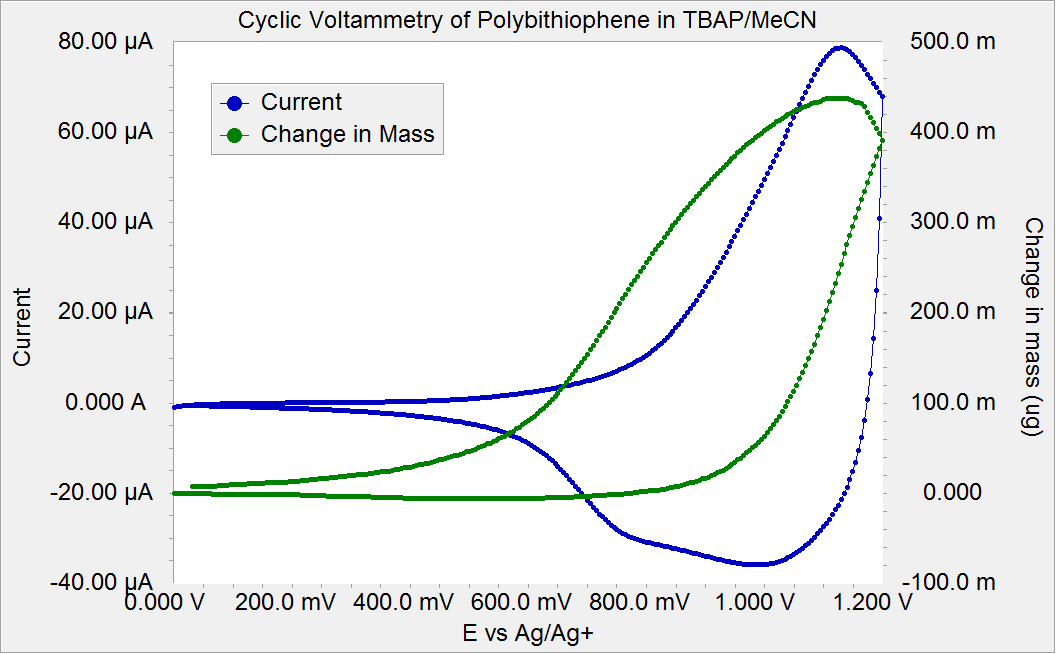 Figure 2: Mass and current versus voltage for one cycle of polybithiophene in 0.1 M TBAP/MeCN. Scan rate was 100 mV/s.

where Df is the change in frequency and Cf is the theoretical calibration factor, 226 Hz cm2/µg, for a 10 MHz AT-cut quartz crystal. Mass change plotted against charge for a cycle in monomer-free electrolyte reveals information about mobile species during oxidation and reduction. Figure 3 shows the change in mass (∆m) versus the charge (C) for the first redox cycle. 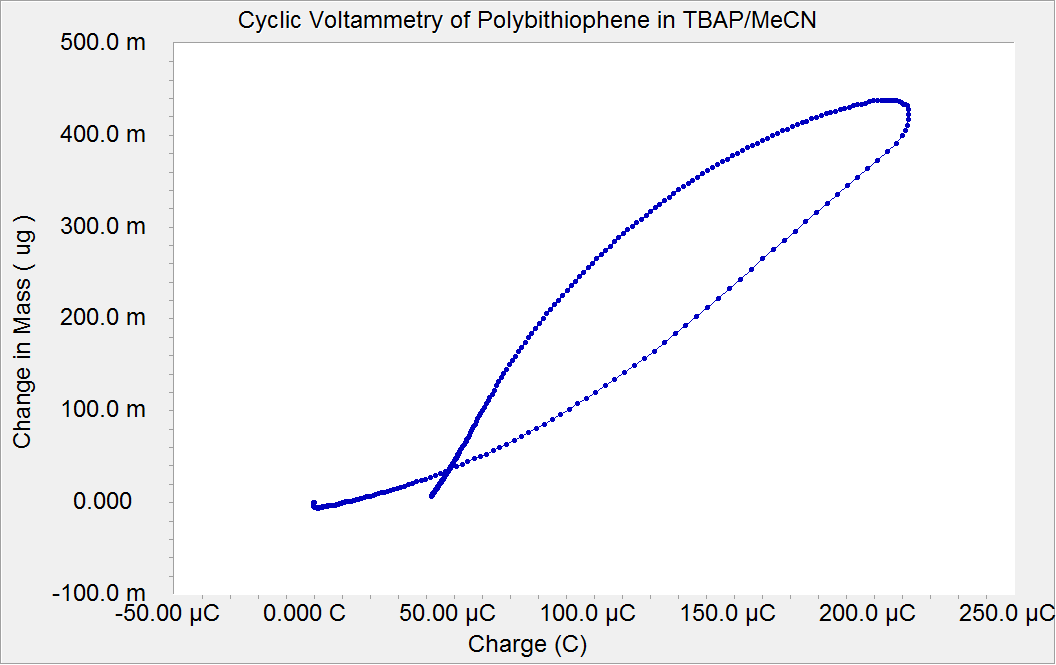 Figure 3: Change in mass versus charge for one redox cycle of polybithiophene in 0.1 M TBAP/MeCN. Scan rate was 100 mV/s.

The overall slope during oxidation is 1916 µg/C. This can be converted to a molar mass by the following equation

where F is Faraday’s constant, and n is the number of electrons. Here n = 1 because each thiophene in the polymer ring is being oxidized. The molar mass of 185 g/mol indicates that one perchlorate (99.5 g/mol) and approximately two molecules of MeCN (41 g/mol) enter the film for each electron that leaves the film.

A future application note will deal with thicker polybithiophene films which become viscous and swell when cycled in the presence of electrolyte. In these instances, mass measurements must be examined with a bit of skepticism because viscoelastic losses and density changes can also contribute to frequency changes. Please see our Basics of a Quartz Crystal Microbalance application note for more information on how viscoelasticity and density affect measurements.