Biofilms are microbes attached to a surface. The microbes form a film on the surface, giving rise to the name biofilm. This Application Note deals specifically with bacterial biofilms that convert chemicals to electrical current on electrodes. Because of this function, we refer to them as electrochemically active biofilms (EABs). Interest in EABs ranges from their function as bioanodes and biocathodes in microbial fuel cells to new types of biosensors as well as novel biosynthesis of sustainable chemicals.

This application note shows results for Geobacter sulfurreducens, an oxygen-intolerant species of bacteria able to grow on electrodes.[1]

Unlike typical electrochemical experiments, current must be collected over several days to give time for the biofilm to grow. Choose an appropriate sampling rate, such as one measurement every five minutes. We show only one day of growth.

Gamry’s jacketed EuroCell™ Electrochemical Cell Kit was used as the reactor vessel. An eSorptionProbe (Part No. 971-18) with 10 MHz Au-coated crystals was used. A saturated Ag/AgCl electrode was used as reference.

All parts of the reactor vessel were sterilized prior to biofilm growth.[2] The assembled reactor vessel was therefore sterile. Biological growth medium was then added. Oxygen was purged from the vessel using a gas mixture of 20% CO2 and 80% N2. The electrode potential was then fixed to 0 VAg/AgCl using Gamry’s Framework™ software with the chronoamperometry script. A suspended cell culture of G. sulfurreducens was added and current was recorded. 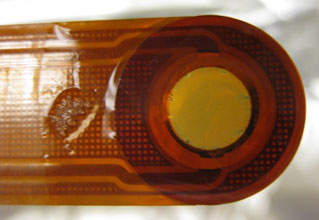 Figure 1. Photograph of biofilm grown on the 10 MHz Au-coated crystal for the eSorptionProbe.

The biofilm acts as a catalyst for the electrochemical conversion of acetate to carbon dioxide. The half-reaction above is an overall description of what happens in an individual cell in the biofilm. It does not account for carbon assimilation as biomass. The exact path through which electrons follow to reach the electrode surface is complex and not discussed in this Application Note.

For G. sulfurreducens biofilm, the acetate half-reaction is activated at electrode potentials more positive than approximately −0.4 VAg/AgCl. This measured value is true for most Au and C surfaces. Figure 2 shows the result of fixing the electrode potential to 0 VAg/AgCl in the presence of G. sulfurreducens cells and acetate. Cells that attach to the electrode form the initial biofilm. To survive, the initial biofilm metabolizes acetate and produces electrons. This produces an electron flow and is the cause of the increase in current in Figure 2. 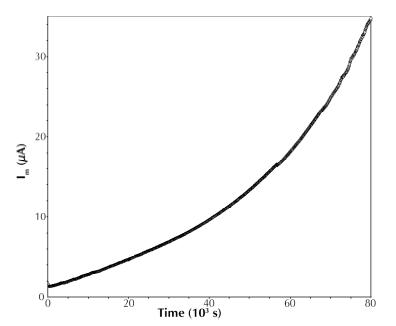 Figure 2. Current output over time of a growing G. sulfurreducens biofilm. The electrode potential was fixed at 0 VAg/AgCl. 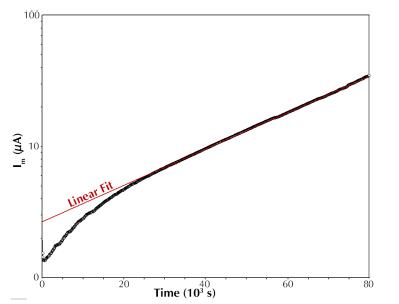 Standard practice is to confirm existence of the biofilm by using scanning electron microscopy. Figure 4 shows a micrograph of the biofilm after fixation (standard procedure). The flat background is the bare Au surface. The biofilm was purposely removed to show the Au surface and biofilm in the same image. The micrograph is a visual indication that biofilm produced the current observed. If the biofilm is distinct like the pink hue in Figure 1, a photograph may be sufficient. 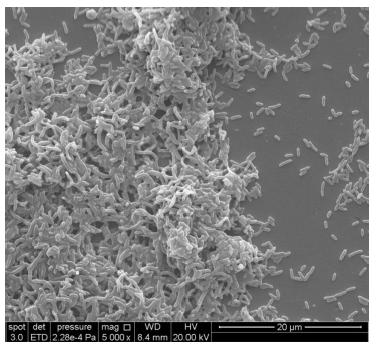 Figure 4. Scanning electron micrograph of the biofilm on the Au-coated crystal after growth and a standard fixation procedure. After fixation, the biofilm is no longer alive. Single cells and multi-layered cell clusters are visible.

During biofilm growth, the chronoamperometry script can be stopped without damaging the biofilm. This is valuable for a simple voltammetric sweep. Usually cyclic voltammetry is the preferred script because of its simplicity. Figure 5 shows two cyclic voltammograms of a growing biofilm (replicate) at 44 hours and 49 hours of growth. A catalytic wave is observed with several redox peaks superimposed between −0.33 VAg/AgCl to −0.23 VAg/AgCl. As the scan reached positive potentials, the effect of the redox peaks is minimized. In this potential region, limiting current is observed. The height of the catalytic wave increases with biofilm growth. 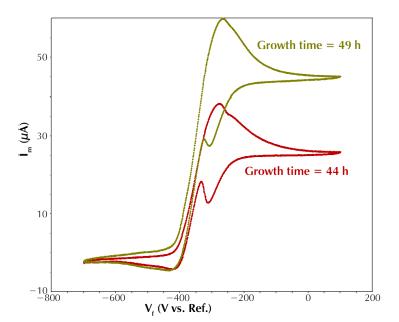 Figure 5. Cyclic voltammograms of a G. sulfurreducens biofilm during growth. Scan rate was 30 mV/s. (Note that the chronoamperometry scan was stopped in order to run the cyclic voltammetry script.)

Cell attachment and biofilm growth can be monitored in real-time using Gamry’s electrochemical quartz-crystal microbalance (eQCM). Using the Gamry Resonator™ software, both series frequency-shift (dFseries) and current can be recorded simultaneously. Figure 6 shows dFseries and Reduced Q (secondary y-axis) during biofilm growth. This was recorded simultaneously with the current shown in Figure 2. The graphs are separated for clarity. 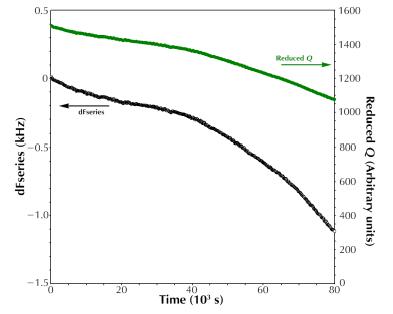 Figure 6. dFseries and Reduced Q over time decreasing in response to biofilm growth on the QCM. These data were taken simultaneously with the current data from Figure 2.

During the time it took the biofilm to reach a current output of 40 µA in Figure 2, dFseries reached −1250 Hz. Usually, for rigid films, dFseries can be converted to mass using the Sauerbrey Equation. However, the decrease in Reduced Q from 1500 to 1000 indicates a significant decrease in the rigidity of the biofilm. As a reference, a −1800 Hz dFseries shift during copper plating onto the QCM results in a minimal decrease in Reduced Q from 1280 to 1240. The important point is that it is typically incorrect to use the Sauerbrey Equation to convert dFseries to mass for a biofilm, because of the biofilm’s viscous nature.

For most rigid film depositions using the eQCM, a plot of dFseries vs charge yields a straight line (for example, copper plating). In the case of G. sulfurreducens biofilm, this is not true.2 The reason is that charge passed does not determine how much biofilm has grown on the electrode surface. For example, it is possible to have the total charge passed at the electrode increase with time without biofilm growth. Current passed over time is more relevant for G. sulfurreducens biofilm because current is a proxy for biofilm growth. Figure 7 confirms this expectation and shows a linear correlation between dFseries and current. 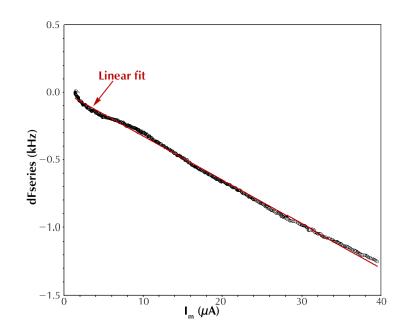 Gamry Instruments would like to acknowledge Dr. Jerome T. Babauta and Professor Haluk Beyenal of the Biofilms Research Group at Washington State University for the generation of these data.