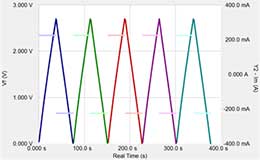 An introduction to electrochemical capacitors is found in Part 1 for this application note, which discusses techniques familiar to chemists who have worked outside of energy-storage applications. Part 3 describes theory and practice of EIS measurements on capacitors.

You can find all Parts of this application note in the Application Notes section on Gamry’s homepage, www.gamry.com.

Cyclic Charge-Discharge (CCD) is the standard technique used to test the performance and cycle-life of EDLCs and batteries. A repetitive loop of charging and discharging is called a cycle.

Most often, charge and discharge are conducted at constant current until a set voltage is reached. The charge (capacity) of each cycle is measured and the capacitance C, in farads (F), is calculated (Eq. 1).

where Q is the charge in coulombs, and V is the voltage window. Both are plotted as a function of cycle number. This curve is called the capacity curve.

In practice, charge is commonly called capacity. Usually, capacity has the unit of ampere-hour (Ah), where 1 Ah = 3600 coulombs.

If capacity falls by a set value (10 % or 20 % is customary), the actual number of cycles indicates the cycle-life of the capacitor. In general, commercial capacitors can be cycled for hundreds of thousands of cycles.

Figure 1 shows CCD data recorded on a new 3 F EDLC. Five cycles are shown with current and voltage plotted versus time, with each cycle graphed in a different color. 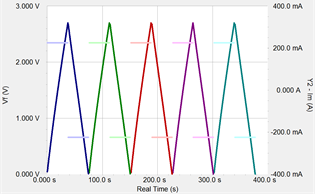 Figure 1. CCD test on a new 3 F EDLC. Voltage and current versus time are shown for five cycles. For details, see text.

This new EDLC shows almost ideal behavior: the slope of the curve (dV/dt) is constant and is defined by Eq. 2.

V is the cell potential in volts (V), I is the cell current in ampères (A), and Q is the charge in coulombs (C) or ampère-seconds (A·s).

Figure 2 shows the same CCD procedure but on a 3 F capacitor damaged by excessive voltage. This capacitor’s behavior is obviously far from ideal. 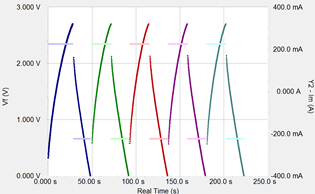 Figure 2. CCD test on a damaged 3 F EDLC. Voltage and current versus time are shown for five cycles. For details, see text.

Increased self-discharge causes an exponential shape of charge and discharge voltage versus time. A higher equivalent series resistance (ESR) also leads to a large voltage drop (IR-drop) at each half-cycle, which dramatically reduces power and capacity. The damage has greatly decreased the efficiency of this EDLC.

Figure 3 shows the typical setup windows for a CCD experiment, presented in three pages. A simple CCD test consists of a repetitive loop through several steps:

On Page 1 of the setup, output file name as well as various cell and setup parameters can be defined. The Working Lead parameter specifies how the potentiostat is connected to a cell. When the working lead (green) is connected to the positive electrode (discharge cathode) of the electrochemical cell, select the Positive radio button for this parameter. Otherwise, select the Negative radio button for this parameter.

The optional Cable Check warns in a separate window how cable connections are appropriate for the selected Cell Type. 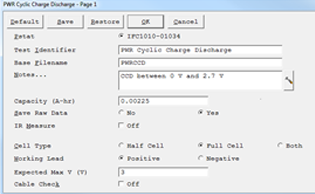 All relevant parameters for the charge and discharge steps are set on Page 2 of the CCD setup (see Figure 3).

A CCD experiment can be started with a charge or discharge step. The length of a CCD test can be controlled by the cycle number and various Loop End criteria (see Figure 4). The measurement stops after reaching the cycle limit, a loop end criterion, or it may be cancelled at any time by pressing F1‑Abort.

After each single step, the cell’s capacity is automatically calculated and shown in a capacity curve.

Two parameters are crucial when selecting Constant C‑rate mode. The first parameter is the rated/expected capacity of the battery and is set in the first setup window of a CCD experiment. The second parameter is the multiplier/divisor N and defines the rate. Note that N is an integer. Use Capacity * N for C-rates above 1C and Capacity / N below 1C.

Enabling Voltage Finish holds the cell potentiostatically at the end potential until the measured current falls below a limiting value or a set time is reached. This step is especially advisable if (optional) EIS experiments are performed as it ensures that the potential remains stable and does not drift.

The corresponding EIS parameters can be set on Page 3 of the CCD setup. In addition, the save intervals for raw data (individual charge and discharge curves) as well as impedance data can be selected. 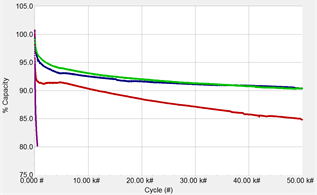 Cycle-life depends on a number of variables:

To demonstrate the first point, four 3 F EDLCs were cycled to different voltage limits, most of them well beyond the 2.7 V maximum voltage specified for the EDLC.

Figure 7 shows the corresponding curves with the relative change of capacity for up to 50 000 cycles. The capacitors were charged and discharged with a current of ±2.25 A. The lower voltage limit was 1.35 V, which is the half-rated voltage of the EDLC. The upper voltage limits were set to 2.7 V, 3.1 V, 3.5 V, and 4.0 V.

Capacity-fade is more pronounced on the samples charged to higher voltage limits. The capacity is reduced by only 10% after 50 000 cycles at potentials below 3.0 V. The capacitor charged to 4.0 V lost 20% of its capacity after 500 cycles.

The strong degradation in performance at higher potentials mainly occurs when Faradaic electrochemical reactions decompose the electrolyte. This can inhibit the electrode surface, lead to gas formation, damage the electrodes, and have other adverse effects.

Cycle-life also depends on the applied current. To demonstrate the effect of higher currents on CCD experiments, current values significantly beyond the specifications of the capacitor were chosen. The used 3 F capacitors used are specified for currents of 3.3 A.

For these experiments currents larger than 3 A were needed. This requires the use of a Gamry Instruments Reference 30k Booster.

Three capacity plots with different charge and discharge currents are shown in Figure 8. The EDLCs were charged and discharged between 1.35 V and 3.5 V. The applied current was set to 2.25 A, 7.5 A, and 15 A. 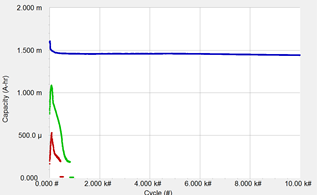 The capacity curves at higher currents show a steep capacity decline with increasing cycle number. The two EDLCs that were cycled with 7.5 A and 15 A failed before reaching 400 and 800 cycles respectively.

Even on the first CCD cycle, higher currents lead to reduced capacity. Voltage is lost due to IR-drop (VLoss) according to Eq. 3:

Assuming 40 mΩ ESR for 3 F capacitors, we expect these parameters for different currents:

The IR-drop reduces capacity by about 19% and 50% respectively. Note the rough agreement between the initial capacities of the measurements with 7.5 A and 15 A in Figure 8 and Table 1.

The two capacitors cycled with 7.5 A and 15 A got quite hot before they failed.

The heat generated by rapid cycling is also caused by IR-losses. Assuming a constant ESR, the power loss PLoss in these devices can be estimated from Eq. 4:

Table 1 shows that power loss is estimated to be greater than 2 W, even at 7.5 A. The small 3 F capacitors used for these tests cannot dissipate this much power without getting very hot. Heat can cause degradation of the electrolyte and dramatically reduce lifetime.

The capacitor cycled at 15 A was so badly swollen at the end of the test that it was surprising it had not burst.

CCD on Stacks for Higher Voltages

For high-power applications, several energy-storage devices are often combined in serial and parallel circuits. For serially-connected capacitors, Eqs. 5 and 6 apply:

Figure 9 shows a schematic diagram for a serially connected stack of capacitors.

If all single cells in a stack show the same parameters, the stack is called balanced. The stack is unbalanced if there are cells that differ in performance parameters like capacitance, ESR, or leakage resistance.

Capacity curves cannot show irregularities in stacks. All cells receive the same current so their capacities are identical. In the following sections, tests were done with small stacks containing three series-connected EDLCs. The stacks were deliberately unbalanced to show the effect of two common irregularities. To reveal these irregularities, different plots were used.

Using capacitors with different capacitances in a stack leads to fluctuations in voltage defined by Equation 7.

Applying a constant charge Q on a stack leads to a lower voltage Vi for single cells with higher capacitance Ci.

A serial stack made up of two 3 F EDLCs (C1, C2) and one 5 F EDLC (C3) (see also Figure 9) was used to test an unbalanced stack. All three capacitors were initially charged to 1.35 V before being added to the stack, so the initial stack voltage was close to 4 V.

The stack was cycled for 500 cycles with a current of ±0.225 A. The test started with a charge step. The cycle limits were set to 4 V and 9.5 V. The voltage of each single cell was measured with three AE channels. 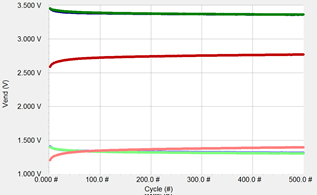 Figure 10 shows one presentation of the data from this test. The limiting voltages of each channel for the charge (darker colored) and discharge step (lighter colored) versus cycle number are plotted.

As expected, the final discharge voltage for each cell (regardless of capacitance) is close to 1.3 V. The small deviations from 1.3 V are probably caused by leakage-current imbalance, described later.

The final charge voltage is more interesting. If we had a balanced stack, the fully charged stack voltage of 9.5 V would be evenly divided among the cells so each cell would charge to about 3.16 V.

Figure 11 shows the calculated energy of the charge step versus cycle number for the same measurement. 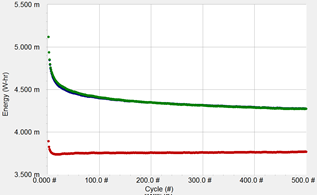 In a capacitor stack with unbalanced capacitor values, the capacitors with the highest capacitances have a lower effective voltage range. These deviations in voltage also lead to differences in energy.

The energy of the 5 F EDLC is reduced due to lower voltage limits. The two 3 F EDLCs try to balance this voltage loss with higher voltages. Their energy content increased.

In extreme cases, the voltage (and energy) increase can be large enough to damage the cells causing a safety hazard.

Leakage resistance affects both stack performance and cycle-life. It can change as a capacitor ages. Low leakage resistances lead to higher leakage currents which discharge the cell without external current applied.

Leakage resistance can be modeled as a resistor parallel to a capacitor (see Figure 12).

Figure 13 shows the self-discharge from leakage current. Two resistors (R1 = 16.5 kΩ, R2 = 154 kΩ) were installed parallel to C1 and C2. The intrinsic leakage resistance for C3 is in the MΩ-range. All three capacitors have a nominal capacitance of 3 F. The stack was charged to 8.1 V using a charge current of 0.225 A. After charging to 8.1 V the voltage was recorded in currentless state for 6 h. 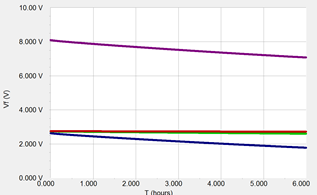 The calculated leakage current for C1 is 47 µA whereas the other two capacitors exhibit values of only 7 µA (C2) and 2 µA (C3).

Higher leakage currents also lead to increased loss in energy and power. Figure 14 shows the behavior of energy during cycling. The prior stack setup was cycled for 500 cycles between 4 V and 8.1 V with a current of ±0.225 A. 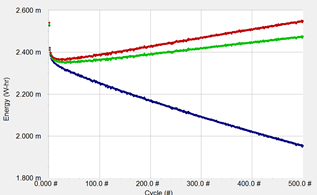 Higher leakage currents cause continuous energy-fade during cycling. The energy of C1 decreases continuously caused by higher self-discharge. This is in contrast to Figure 10 and Figure 11, where voltage- and energy-imbalances were independent of the cycle number.

Capacitors C2 and C3 compensate for this loss and overcharge to higher voltages. Energy increases but this may be at the cost of lower electrochemical stability and decreased cycle-life.

This application note describes Gamry’s CCD software by tests on single 3 F EDLCs and small stacks. Effects of different setup parameters on performance of EDLCs were presented and the influence of common irregularities in stacks was described. The combination of single-cell investigation and recording of multiple parameters enables accurate evaluation of irregularities in stacks.