Micron-thick films of Coconut Oil can be formed by spin-coating and the thickness of the solid films estimated using QCM-I. The viscoelastic changes in the layers can be observed during melting and subsequent structural reorganisation on re-solidification. This data can be compared to the effect of dish-cleaning detergent on the films at low temperatures in an aqueous environment. The dissolution process and the effect of temperature on the films can be monitored. For such relatively thick films, effects due to film uniformity and shear-wave penetration depth on the QCM measurement can be clearly observed.

The QCM-I instrument monitors the impedance spectrum of an oscillating quartz crystal sensor, tracking the changes in the resonant frequency (F0) of its fundamental and overtones as well as their peak widths (Full Width Half Maximum, FWHM), all in Hz. The former is a function of the mass coupled to the sensor surface and the latter, of the viscoelasticity or rigidity of the coupled material.

The pristine, sensor crystal was first measured bare in air and then re-measured after coating. The Coconut oil was spin coated from the molten liquid at 37°C, rapidly cooled to 19°C and allowed to solidify and stabilize, before subjecting it to further treatment. Measurements were made between 19°C and 31°C, to span its melting point of 24°C, in air and in water with addition of 1% Ecover® dish detergent.

Figure 1 shows the changes in the fundamental, F1, and the FWHM1 from a bare sensor, to a spin- coated one in air and then through a thermal cycle in 1°C steps from 19ºC to 29°C and back down to 19°C in one step.

The frequency drop (∆f) due to the film of -16,000Hz can be converted to a mass change (∆m) using the Sauerbrey equation, which assumes a uniform rigidly coupled layer. 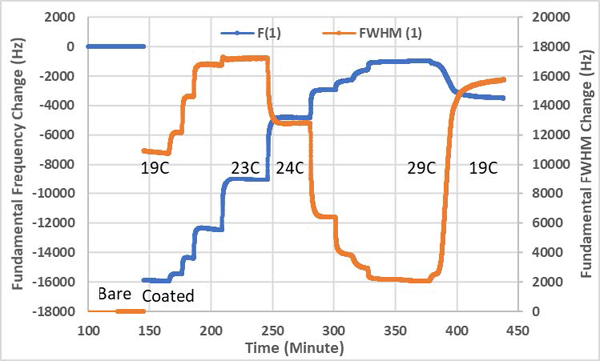 Figure 1. Fundamental Frequency (blue) and FWHM (orange) changes for a Coconut Oil film in air between 19 ºC and 29 ºC.

The frequency and FWHM changes as a function of temperature are shown in figure 2. The FWHM is significantly increased from the bare sensor as it is a thick viscoelastic film. As the temperature increases the FWHM initially increases further as the solid film softens and becomes less rigid. At the same time the frequency change reduces as less of the film is rigidly coupled to the crystal surface. At 24ºC the FWHM starts dropping and the reduction in the frequency change is most pronounced. This is the melting point of the film; it is no longer rigidly coupled to the surface and the shear wave probes less of the film, hence the reduction in both signals. By 29ºC, the net frequency change is only -1000Hz and FWHM ~2000Hz, which corresponds to a Newtonian fluid layer on the sensor surface (∆FWHM/∆F=2). Compared to the solid film, the frequency changes are relatively small because the shear wave penetration depth is significantly less than a micron in the liquid. Though, in comparison with other experiments, 1000Hz still represents a very large change indeed!

Figure 3 shows the ∆FWHM for the experiment plotted against ∆F. The yellow line shows the expected response for a thin rigid layer, and the orange line of slope 2, that for a Newtonian fluid. 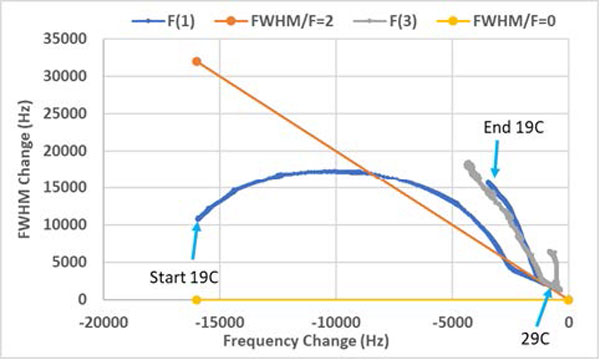 Figure 3. ∆FWHM vs. F for fundamental frequency (Blue) and 3rd harmonic (Grey) for the Coconut film in figs. 1 and 2.

The film starts at 19ºC with the fundamental resonance data in the viscoelastic film region, between elastic solid (yellow) and viscous (Orange) lines. As it melts and the film becomes more viscous it moves towards the viscous boundary, crossing it temporarily before following it as the film has melted completely. The data can move above the line due to non-uniformity of the film on the sensor surface.

On reducing the temperature back to 19ºC it follows a very different line in the ∆FWHM/∆F >2 region. Inspecting the sensor crystal at the end showed the oil to have separated into discrete crystallites/droplets on the sensor surface (see figure 8). The resonance can be understood to be broadened due to a mixture of structures on the sensor surface. The 3rd harmonic is predominantly in this region with a much smaller ∆F. As the displacement is 1/9th of that of the fundamental it probes significantly less than the whole film thickness and is more sensitive to variations in local structure within the film. For such thick films the data from the harmonics have only limited value.

Figure 4 shows the Sauerbrey mass and temperature steps for a slightly thinner film, 175μg/cm2, 1.9 μm thick. (calculated from the ∆F1 shown in fig. 5) The addition of water to the dry film causes a larger increase than expected, (c.f. the reduction at the end of the experiment when water is removed). This shows that the film is likely to be uneven and water is trapped at the rough interface.

When 1% detergent is added, after a very small increase, the mass apparently decreases very significantly. However, when water is re-introduced, much of the mass returns. The detergent is then introduced once more and the mass decreases again, this time more rapidly. After a 19ºC to 31ºC excursion, water is added again and this time very little extra mass returns, which shows that the coconut oil has finally been removed from the sensor surface.

Figure 5 shows the Frequency and FWHM changes. On addition of detergent at the start, the FWHM increases a little together with a very small drop in frequency, which can be attributed to detergent attaching to the outside of the oil film. After that the frequency increases rapidly and the FWHM increases too before dropping significantly. This behaviour looks very similar to the melting process, with an initial increase in FWHM followed by a drop with accompanying increase in frequency. When the water is reintroduced, the frequency drops again and the FWHM increases to a maximum. This is not the reverse of the first process as the film is significantly more dissipative/less rigid than the initial spun solid film. 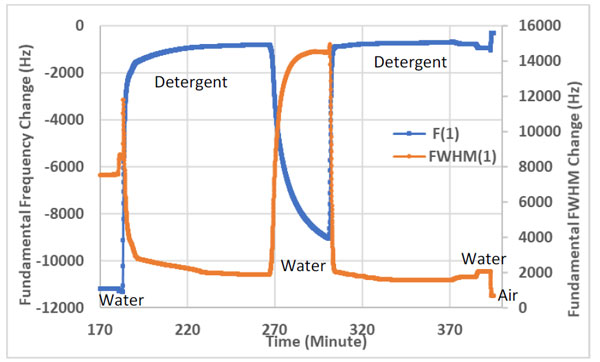 Figure 5. Frequency (blue) and FWHM (orange) changes for a Coconut Oil film in water and detergent.

Figure 6 shows the plot of ∆FWHM1 vs. ∆F1. The initial coconut oil film is more rigid than the previous, thicker, film and the addition of water increases the frequency parallel to the ∆FWHM/∆F=2 line. As detergent is added the plot quickly joins the Newtonian fluid line and tracks it very closely as the ∆F and ∆FWHM values decay. This suggests that the effect of the detergent has been to transform the solid film to one that is in effect more like a viscous liquid. As water is reintroduced the plot crosses above the line, suggesting that as the detergent is removed, the residual film may become less uniform. This appears more pronounced as detergent is reintroduced again.

It is striking the extent to which the detergent fluidizes the film to the point that it becomes barely visible against the water and gives such a similar signal to the molten oil. This result indicates a mechanism of action of the detergent on the solid oil that modifies the bulk of the oil before or during removal, as opposed to one that simply solubilizes the outermost layer of oil at the solid oil/water interface.

The removal of the coconut oil film by the detergent after thermal treatment is however without doubt, as only a small amount of mass returns when water is reintroduced again, and injection of air at the end of the experiment returns the frequency almost to the original baseline (complete removal of water from a sensor chip surface is unlikely without drying with a stream of dry gas).

Figure 7 shows a plot of ∆FWHM/∆F and temperature vs time during the temperature challenge. The slope value is initially approx. -2.3, but increases, mostly between 23 ºC and 25ºC, to -2.15. This shift towards a ratio of 2 would correspond to loss of non-uniform material from the surface and is likely to signal the removal of the highly hydrated coconut oil/detergent film. 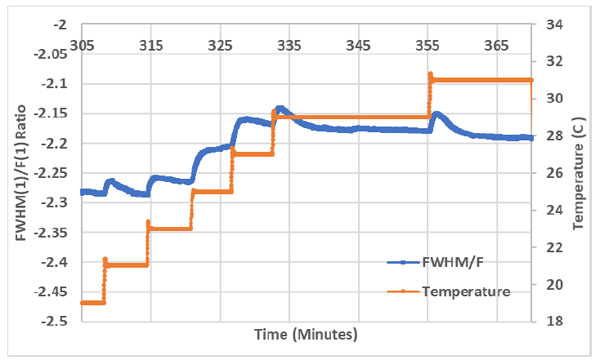 Figure 7. ∆FWHM/∆F and temperature vs time

It is interesting, if not surprising, to note that increasing the temperature to above the melting point of the oil should expediate the cleaning process in this way.

These experiments used as-received Au coated sensor crystals. However, it would be possible to increase the uniformity of the spin coated films and reduce their reorganization after melting by using a hydrophobic thiol monolayer on the gold surface.

The data in this application note shows that relatively thick films can be measured using QCM-I, but in this case the fundament frequency provides the bulk of the information due to its order of magnitude larger oscillation amplitude compared to the 3rd harmonic (and those above).

In this case, measuring the mass of spin-coated films can be readily done by comparing the frequency with that of the uncoated sensor and experiments can be stopped and restarted to facilitate this.

The Sauerbrey mass, which is an approximation that assumes a rigid and uniform film, can provide useful data where the ∆FWHM/∆F ratio is low indicating a more rigid layer. However, interpretation of the data must be treated with caution when this increases towards a value of 2. For thick films, changes in viscosity can result in large apparent mass changes due to the differences in the extent to which the film is rigidly coupled to the oscillating sensor surface.

Values of ∆FWHM/∆F above 2 are likely to indicate non-uniformity of a film on the sensor surface. Figure 8 shows the surface of the sensor at the end of the coconut oil in air experiment, discussed in the first section of this application note.

Figure 8. Photograph of the Au sensor surface at the end of the Coconut oil in air experiment shown in figures 1-3.