Solid-contact (SC) ion-selective electrodes (ISEs) are sensors used to measure ion concentrations in medical and environmental applications. The electrochemical characteristics of SC ISEs depend on the SC used as the ion-to-electron transducer (e.g., conductive polymers) between an electron-conducting substrate (e.g., Au, Pt) and the ion-conducting membrane. The electrochemical characteristics of the SC ISE (equilibration time, standard potential) are also dependent on the electron conducting substrate 1,2. To trace the source of the differences in the electrochemical behavior of SC ISEs built on Au or Pt substrates, PEDOT(PSS)3 was electrochemically polymerized onto Au and Pt contact electrodes of quartz crystals of an eQCM 10M and the frequency change during the growth of the polymer was monitored.

This Application Note describes the differences in PEDOT(PSS) growth during electrochemical deposition onto Au compared to Pt using the eQCM 10M4.

A 10 MHz Au-coated AT-cut quartz crystal (area = 0.205 cm2) was cleaned with methanol and deionized water, then dried with N2. A select number of crystals were platinized by electrodeposition to create Pt-coated quartz crystals. In addition, 10 MHz Pt-coated AT-cut quartz crystals (Gamry Instruments part number 971-00010) were used. The Au or Pt-coated crystals were mounted into a PTFE cell from International Crystal Manufacturing5 in combination with a Pt wire and Ag|AgCl|0.1 M KCl as counter and reference electrodes, respectively. The holder was filled with an aqueous solution of 0.015 mol/dm3 EDOT and 0.1 mol/dm3 NaPSS. PEDOT(PSS) films were deposited galvanostatically by applying 41 µA (0.2 mA/cm2) for 714 s using our Reference™ 600 potentiostat while the frequency was monitored using our eQCM 10M with Resonator™ software. 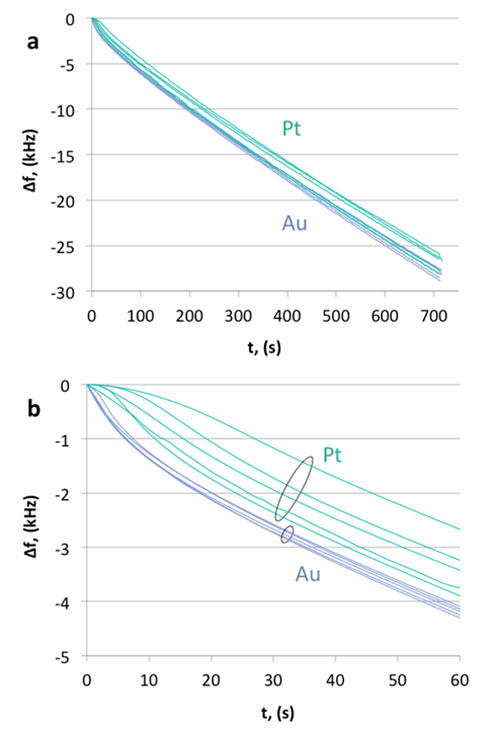 Figure 1. Frequency decrease recorded during (a)the entire 714 s, and (b) initial 60 s of galvanostatic deposition of PEDOT(PSS) films onto the Pt (green)
and Au (blue) electrodes on the surface of the resonating quartz crystals (N = 5 for each substrate).
The black ovals in (b) are meant to group together the Pt and Au transients, also highlighting the differences in the reproducibility.

Figure 1 shows the change in frequency recorded during the entire polymerization (upper plot) as well as the initial 60 s (lower plot) of electrochemical deposition of PEDOT(PSS) onto Au- and Pt-coated quartz crystals.

To accentuate the differences between PEDOT(PSS) polymerization on Au and Pt, the rate of frequency change is plotted in Figure 2. 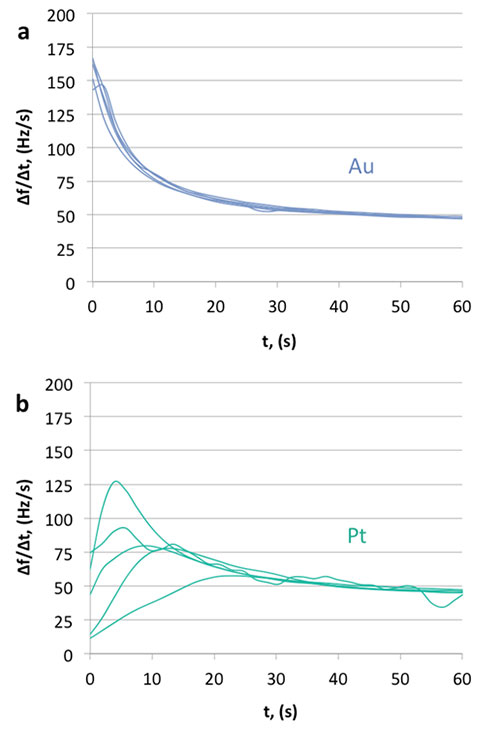 Figure 2. Rate change of frequency during the first 60 s of PEDOT(PSS) polymerization
over Au (a) or Pt (b) electrodes on the surface of the quartz crystals.

This application note highlights the unique advantages of eQCM. The differences in the deposition rate during electrochemical polymerization of PEDOT(PSS) on Au and Pt are clearly visible using this technique.

We thank Jennifer M. Jarvis and Ernő Lindner of the Department of Biomedical Engineering at the University of Memphis in Tennessee for providing Gamry Instruments with this information. We are also grateful to Electroanalysis journal for granting permission to reproduce the figures.