Cyclic Voltammetry (CV) is inarguably the most popular electrochemical technique. It owes its well-deserved reputation to its ability to deduce reaction mechanisms with relatively low-cost equipment and quick experimentation. Since the often-cited paper by Nicholson and Shain, the technique has been the centerpiece of any electrochemical study.

Cyclic voltammetry involves sweeping the potential linearly between two limits at a given sweep-rate while measuring current. The sweep-rate chosen can be varied from few microvolts per second to millions of volts per second.

Electrochemical instrumentation has evolved far since the days of Nicholson and Shain1. Currently, most manufacturers (including Gamry) make digital instruments with digital signal generators. These signal generators approximate the linear sweep with a staircase of variable step sizes and durations. Early in the development of digital instruments (early 1990s), there were reports analyzing the effects of using staircases instead of true ramps2 3 4 5. In staircase voltammetry, current can be sampled at various points during the step. Two of the reports2 3 investigated and tabulated the effects of this choice of sampling time. Another report suggested the use of heavy analog filtering either on the applied or on the recorded signal as a way of eliminating the difference. The author demonstrated that through appropriately-chosen analog filters, a ramp can be approximated by a staircase and the measured response is not adversely affected.

A later study5 employed simulations to show that, provided the potential steps are small enough, a staircase signal generated similar results to the linear ramp. The author investigated different coupled chemical-reaction mechanisms including EC, CE, ECE, etc., in addition to surface-bound reactions like amalgamation and adsorption.

In this note, we investigate the differences between data taken using a true analog ramp and a staircase using selected systems. We show that, for experiments where faradaic reactions of solution species are studied, approximating a ramp with a staircase is adequate. However, in experiments where faradaic reactions of surface species are involved, or when capacitance is measured, care has to be taken as there can be remarkable differences in the results. We further introduce oversampling as an alternative answer and show that the oversampled and averaged data do not differ from those measured using the analog ramp.

Generally, in a digital sweep the standard convention is to acquire one data point at the very end of the step10. Gamry calls this method “Fast” mode (Figure 2). This method of sampling discriminates against any capacitive or surface-bound reactions. The current caused by any capacitive charging or faradaic current confined to the surface decays in the initial part of the step and does not contribute to the measured current.

With “Surface” mode, Gamry enables a unique sampling method to eliminate the differences between a staircase and a true ramp. In surface mode, the data are sampled throughout the duration of the step and averaged. This allows capturing both capacitive effects and any faradaic effects confined to the surface.

For the experiments used in this application note, a Gamry Reference 3000 was used with the PHE200 and the VFP600 software packages. The Cyclic Voltammetry experiments were performed using the internal digital signal generator as well as a true analog signal generator (Model 175 from Princeton Applied Research6). Figure 2.  Two different sampling modes: fast-mode samples at the very end of a given step, and surface-mode samples throughout the step.

All data were acquired with a 100 mV/s sweep rate with 3 mV steps when using the Gamry Framework software. When the analog signal generator was used, Gamry’s Virtual Front Panel Software (VFP600) was employed with a sampling rate of 33.3Hz.

For the three-electrode experiments, Dr. Bob’s cell was used along with a 3 mm Pt working electrode, a saturated calomel reference electrode and graphite counter electrode.

For the H2SO4 experiments, the Pt working electrode was polished prior to immersion in 1 M H2SO4. 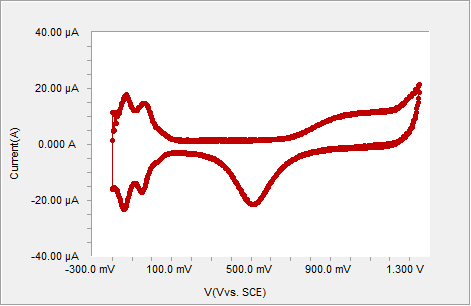 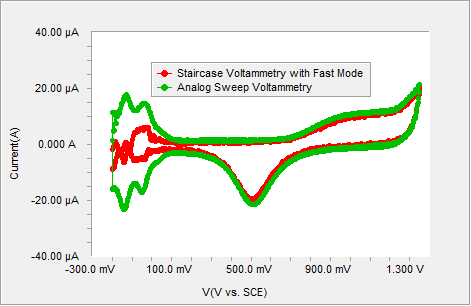 Figure 4.  Polycrystalline Pt in H2SO4 using staircase voltammetry with current sampled immediately prior to the step compared to the analog sweep.

There are several distinct regions in the cyclic voltammetry profile. Starting from the negative end of the voltammogram, the first region of up to ~0.1 V is the adsorption (reductive peaks) and desorption of hydrogen. From 0.1 V to about 0.6 V no faradaic reactions occur. The third region is the oxide-formation region starting at ~0.6 V9. The reduction of platinum oxide (negative currents) occurs at ~0.5 V. This voltammetry has been well-studied and understood. The H-adsorption region, in particular, is often used as a tool to deduce the electrochemically active area of the Pt electrode.

Typically, in staircase voltammetry, a current reading is acquired immediately prior to the next step10. This method of sampling discriminates against any capacitive or surface-bound reactions. The current caused by any capacitive charging or faradaic current confined to the surface decays in the initial part of the step and does not contribute to the measured current. Therefore, the hydrogen adsorption region is not well defined with the staircase voltammetry as shown in Figure 3.

Gamry employs a unique sampling mode to eliminate this difference. Instead of sampling the current at the end of the step where all the capacitive and surface related current has decayed, you can sample the current throughout the step, and average. This way, the current from capacitive and surface-related effects are measured as well as any persistent effects throughout the step. This sampling mode is given the name “Surface Mode” in Gamry’s Framework software. When surface-mode sampling is used, structure in the data is recaptured as shown in Figure 5. 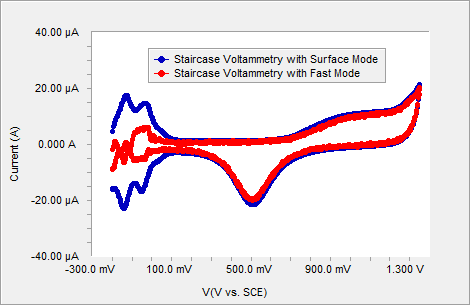 Another example where staircase voltammetry has to be scrutinized is the study of double-layer capacitance (or capacitors in general).

With an ideal capacitor, the current response to an applied ramp is ν · C, where ν is the sweep rate and C is the capacitance11. The effect of resistors in series (either stray or intentionally added) can also be shown to be confined to the initial rise-time. The steady-state current (even when the resistance is considered) is a good measure of the capacitance.

From the reasons mentioned in the previous section, when calculating a capacitance from a staircase voltammogram, you must pay attention to the step size and length compared to the time constant of the system. 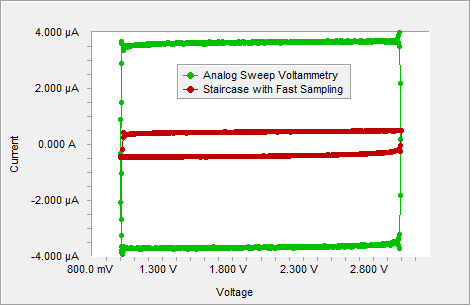 We illustrate the problem with a 36.2 µF12 capacitor. Its capacitance is the correct order of magnitude for cm2-sized electrodes. At 100 mV/s, the expected steady-state current for this capacitor is 3.6 µA (36 µF × 0.1 V/s).

The voltammetry with an analog signal generator (at 100 mV/s, 33.3 Hz sampling) is compared to the data with the classically-sampled staircase voltammogram (100 mV/s, 3 mV step) in Figure 6. The time constant of the 36 µF capacitor is many orders of magnitude smaller than the step duration used in the experiment. Therefore the measured current in the staircase voltammogram is much lower than that of the analog sweep.

Using Gamry’s surface-mode sampling recovers the expected 3.6 µA as shown on Figure 8 (with the same hardware settings used for Figure 7).

The difference between staircase voltammetry and analog sweeps isn’t always obvious. In this section, we investigate two such cases. 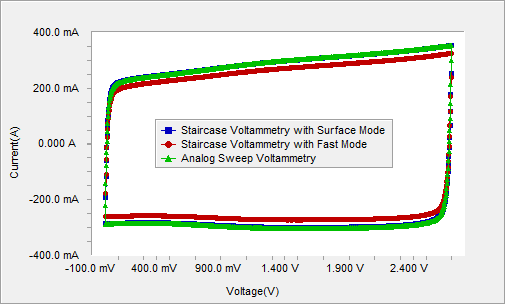 The first case is electrochemical capacitors. Because of their large capacitance, the time constants for the currents to decay after a step are comparable to the typical step duration. Therefore, the difference between the analog sweep and the staircase is not as pronounced as shown in Figure 9.

As a second example, we will use the Fe2+/3+ redox couple. In the typical Cyclic Voltammetry experiment where the faradaic current is dominant, the effect is insignificant. As shown in Figure 10, the peak current does not depend on the mode of sampling at all. The only part of the voltammogram that is dependent on the mode of sampling is the region where the only current measured is the charging of the double-layer capacitance. At potentials around –300 mV versus SCE, you can see the difference caused by sampling mode. 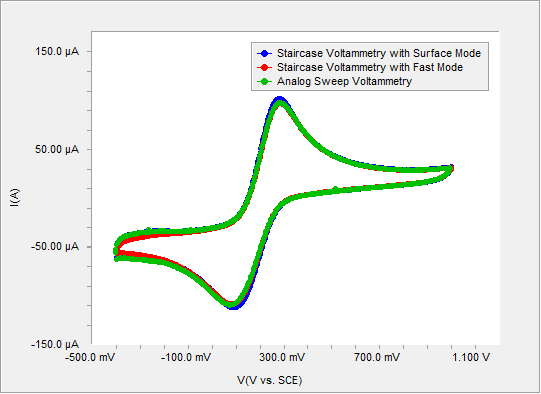 Figure 10.  Voltammetry of an aqueous solution of Potassium hexacyanoferrate

Staircase voltammetry can be used instead of an analog sweep for a number of different electrochemical measurements. In cases where surface-confined effects are important (like H-adsorption or double-layer capacitance) you must take care regarding the choice of step height and duration. In those measurements, employ oversampling and averaging in order to eliminate the differences caused by the use of a staircase signal.