Faraday Cage: What Is It? How Does It Work?

So, kudos to Sawyer, Sobkowiak and Roberts for the only mention we could find on a quick search. They also got the usage correct: “noise-reduction” which is particularly important in low current experiments (such as microelectrode voltammetry). Unfortunately, there is no mention of general setup, grounding, or other experimental techniques that benefit from the use of a Faraday cage such as EIS or corrosion measurements on highly resistant materials. Even a general description what a Faraday cage actually is, is not included.

The British experimentalist Michael Faraday is certainly best known for his work with magnetism and electricity. He was a popularizer of science, the Carl Sagan or Neil deGrasse Tyson of his day, authoring for example the popular A Course of Six Lectures on the Chemical History of a Candle . Far more interesting, though, may be that he once rejected knighthood, twice turned down the presidency of the Royal Society, and also declined to be buried in Westminster Abbey.

Faraday was not terribly good at math. His grasp of the myriad phenomena he studied was more intuitive in nature. Among the many things we can thank him for today are electrical power (as generated by electro-magnetic induction), benzene, and of course the Faraday cage.

What is a Faraday Cage?

In Faraday’s studies and experiments regarding charge, magnetism, and their interaction, he found that charge on a conductor only resided on the outer surface. Further, he discovered that nothing inside that conductor was affected by any change in electrical charge on the outside. Later, field theory was based on Faraday’s work, and he did believe, contrary to the accepted view at the time, that an electric field extended into space beyond a charge. Having somewhat better understanding of things now, we know that the electrostatic repulsion of like charges causes a redistribution of charge to the outside of a conductor resulting in a net electrostatic field within the conductor of zero. “Within the conductor” means any space enclosed by a continuously conducting layer.

This phenomenon produces a pretty neat result: any and all noise with an electronic component that exists outside the cage is completely cancelled within that space. This is the same mechanism we electrochemists use to justify disregarding electrostatic fields in highly conductive electrolyte solutions.  This is also a two-way street: any noise created inside the cage is prevented from escaping to the outside world. This is what keeps us safe near a microwave oven.

perpendicularly coupled with a magnetic field 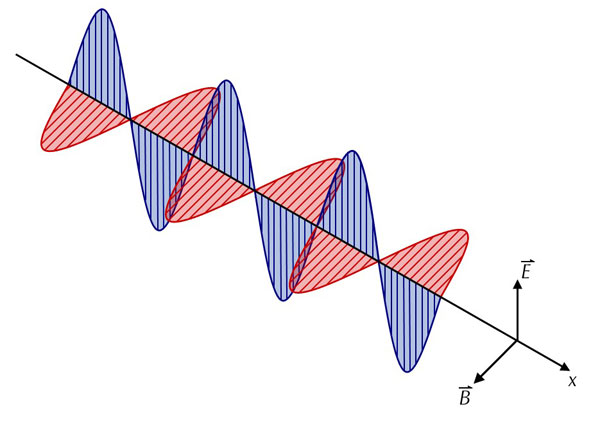 Depending on the radiation’s wavelength – and therefore its energy content – it can be distinguished between different groups. The best known in probably the visible light spectrum. Figure 2 shows a portion of the electromagnetic spectrum ranging from low energy radio waves to high energy gamma rays.

Figure 2. Diagram of the electromagnetic spectrum.

As mentioned before, electromagnetic radiation is always present, interacts with our setup, and distorts the measured results. Especially sensitive experiments with small signals can be heavily affected by decreasing the signal to noise ratio or render measurement data unusable in a certain frequency range.

Assuming a fully enclosed metal box that serves as Faraday cage with the measurement cell in the inside as shown in Figure 3. Without any electric field, electrons and metal cations are evenly distributed within the metal enclosure. Exposure to an electric field leads to an immediate redistribution of the freely moving electrons and therefore current flow within the conductive enclosure. This induces a secondary electric field in the opposite direction of the incoming field. As a result, both of the fields cancel themselves out so that the cell within the Faraday cage experiences basically zero net electric field.

Figure 3. Effect of electric fields on a measurement cell within a Faraday cage.

Magnetic fields are different compared to electric fields. They do not directly interact with charged particles of the conductive enclosure since there are none magnetic charges. In the absence of a Faraday Shield, a measurement cell is fully exposed to magnetic fields (and electric fields obviously, too) causing interferences and noise; see Figure 4.

Figure 4. Effect of magnetic fields on a measurement cell with and without a Faraday cage.

However, magnetic fields can be redirected by either using magnetic permeable materials for shielding or by electric currents induced within the conductive enclosure.

What Faraday Cage to Use?

Well, generally any of them! It would be certainly very nice though if Gamry’s Faraday Shield, as shown in Figure 5, is used which offers lots of versatility and flexibility. The truth, though, is that there is little difference in the noise cancelling behavior between well constructed Faraday cages. There may be a good deal of difference how well or easily you can connect your particular experiments. You in may need a large box to accommodate your experimental apparatus, or entry ports to bring in gases or water, or a material like stainless steel to deal with corrosive vapors and solutions. You may want to see what is going on inside the Faraday cage using a window (with conductive coating) or have as much light blocked out as possible. In the end, a cardboard box wrapped in aluminum foil will give the same noise reduction as a solid metal box.

Wood-frame and copper or aluminum mesh are common for home-built Faraday cages. Solid metal boxes are good choices, but if you are not buying one that is specifically designed for good electronic shielding, pay close attention to door edges and ensure that there is good electrical contact between the sides.

There are three little things to keep in mind when building your own or buying a Faraday cage. First is that breaks in the cage, i.e. for the cable feedthrough, cause gaps that allow for penetration by outside electromagnetic (EM) fields. The penetration of EM radiation depends thereby on the size of the hole as well as the thickness of the conductor.

A second, and more relevant concern, is a long, or even complete break in continuity of the conductive material. Access to a Faraday Cage via lid or door creates the real possibility for such a break in continuity. If one side is discontinuous, even if it is conducting, then charge may not redistribute properly, the cancelling effect will not exist, and a non-zero field will exist within the cage. Use of a wire to connect discontinuous edges can help with low-frequency work but is often insufficient for experiments that have higher operating frequencies and speeds.

A final concern is the conductivity of the cage. This is seldom much of an issue, but as the size of the cage increases it can become a larger concern. The more resistive the conducting layer is, the slower charge redistributes, resulting in a non-cancelling field.

When to Use a Faraday Cage

Use a Faraday cage whenever possible, for it always reduces noise, particularly power line (mains) noise which is ubiquitous – every laboratory in every building in every country with an AC power grid. Some experiments see a larger effect than others, however.  Those are experiments that deal with low currents or high frequencies, and experiments where very precise (and accurate) measurements are required.

Just about anyone doing physical electrochemistry (CV, pulse voltammetry, chronoamp, etc.) falls into the latter category—and when tiny electrodes are involved, then both. Corrosion may not often require as much precision and accuracy, but corrosion-resistant alloys easily can lead to measured currents in (and below) the nA range, where a Faraday cage is definitely needed. EIS involves higher frequencies, and so any reduction in noise is welcome. The safe answer is to use a Faraday cage whenever it is physically possible to do so. If your cell current does not exceed 1 µA, use a Faraday cage.

In Figure 6, cyclic voltammograms taken on an RC dummy cell are shown inside and outside of a Faraday cage. Note that the maximum measured current is hereby only about 1 nA. The CVs were measured between 0 1 V with a scan rate of 0.5 V/s.

The measurements demonstrate that it is possible to still have a considerable amount of noise even though the test cell is inside a Faraday cage. For correct use, it is important to ground the Faraday cage. 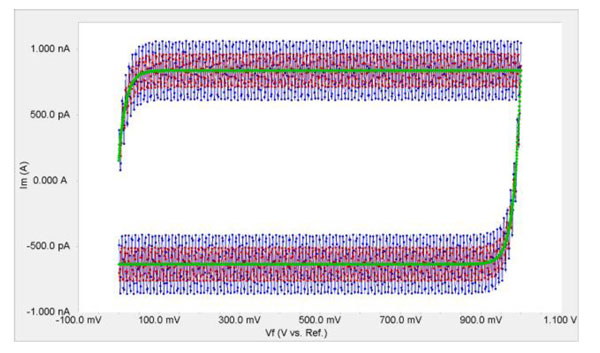 All electrochemical measurements are referenced to some ground potential in the potentiostat. Because of that, effective use of a Faraday cage for electrochemical experimentation must include proper grounding. While the grounding issue can become very complicated, the basic reasoning is fairly simple. The whole of the Faraday cage (including the interior) is at a constant potential and – if not connected – this potential can be quite different from the potentiostat’s ground reference. As a result, large AC voltages between the interior of the cage and the ground reference can exist.

This voltage difference capacitively couples into the electrodes, making the supposedly shielded noise part of the measurement. For this reason, always connect a Faraday cage to the instrument ground. The large majority should also have their potentiostat earth grounded. With some potentiostats this is by default, but for potentiostats designed to operate with floating ground, like all Gamry models, this is done separately.

However, keep in mind that earth grounding is not always a good idea. If you are doing an experiment with a grounded electrode, a Faraday cage may help, but not if it is tied to the same earth-ground. If you want to use a grounded electrode in a Faraday cage, you ought to make sure that the Faraday cage and potentiostat ground reference – while still connected for the reasons mentioned before – are not earth grounded. In this case, your potentiostat must be capable of floating ground operation.

Sometimes, when working with small signals, a noticeable stray capacitance develops between the electrochemical cell inside the cage and the wall of the Faraday cage. Figure 7 shows various EIS spectra on small capacitors and these discontinuities from stray capacitance that appear in the measured phase angle signal. 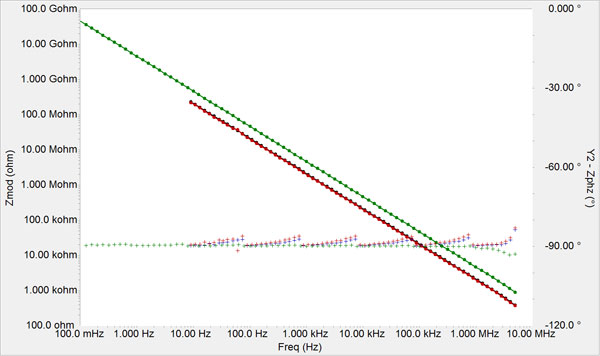 Figure 7. EIS with discontinuities caused by stray capacitance from the Faraday cage.

This phenomenon is sometimes observed with large, flat samples parallel to the Faraday cage’s floor. This effect even appears occasionally using our Calibration Cell inside the Calibration Shield!

Use a Faraday cage whenever your experiment permits, particularly when measuring currents below 1 μA or impedances above 105 Ω. Ensure that it is grounded properly: for Gamry users that means to connect the floating ground lead to the Faraday cage and then either earth ground the potentiostat via the ground lug.

When building or buying a Faraday cage, make sure that it will accommodate the experiments you run and that you have the space for it. Don’t forget about cable strain relief (ring-stand bar or tie-offs inside the cage) and access for gas and water as well as cell cable(s). If you think you may want to use a magnetic stirrer, avoid Faraday cages made with magnetic materials. If you want to check connections and see what’s happening inside the cage without breaking the shielding, use a glass window with conducting coating.