We often hear positive feedback from our users on the Reference 3000 potentiostat with Auxiliary Electrometer (AE). The AE option was designed for users who want to monitor multiple voltage signals synchronized to electrochemical measurements. Four extra cables extended from the front panel of the original Reference 3000 potentiostat, making the AE option a readily identifiable feature. Our Framework Software was also designed to recognize the AE option with our standard scripting. Therefore, from the perspective of the user, the AE option is well known.

In this technical note, we look at the less well-known dual-electrometer feature in our Interface 5000E potentiostat. The dual electrometer allows the user to make a second voltage measurement in addition to the one made by the potentiostat. This is very similar to the AE option of the Reference 3000 potentiostat, with the exception that it uses the pre-existing counter sense (orange) lead to make the second voltage measurement. With no added cables, this feature can be easily overlooked. Effectively, the dual-electrometer feature allows users to make five-electrode measurements.

icell, Vcell, and Vpos (or Vneg) are the parameters that allow us to measure the whole cell impedance and each individual half-cell impedance simultaneously using only a single potentiostat! We will demonstrate this capability using two physical circuits:

An AC Dummy Cell (part no. 990-00419) is shown in Figure 2. The front has a pair of five banana jacks (2 mm and 4 mm) to which you connect the potentiostat cell-cable leads. The back shows the RC-R-RC electrical circuit with the traces also visible. This simple circuit approximates the impedance behavior assuming linearity of two electrochemical interfaces separated by an internal resistance. 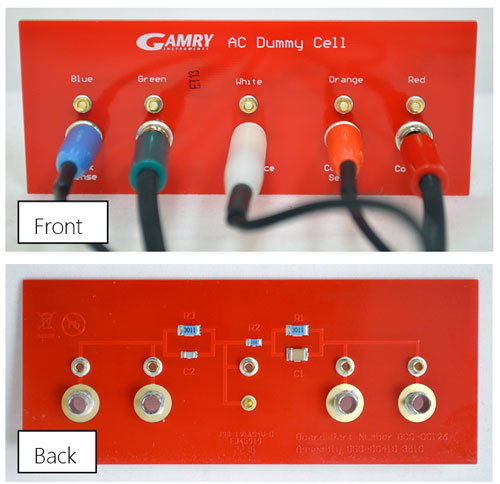 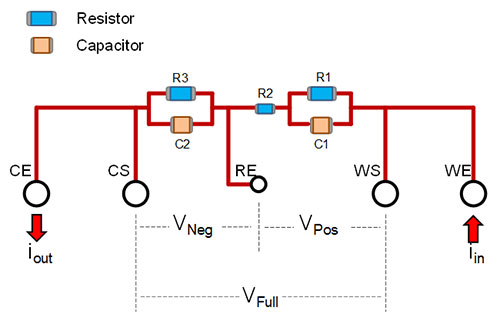 A custom electronic circuit was created in a breadboard using basic commercial electronic components.  The circuit uses the same diagram as in Figure 3, but it differs in two points: 1) The value of the capacitors and resistors are different (see Table 2 below) and 2) the CS/CE and WS/WE are connected in a true four-terminal configuration.

The cables were attached in the AC dummy cell as in the upper photo of Figure 2.  In the Custom Electronic Circuit, special attention was placed to separate the current carrying cables from the voltage sensing cables, as explained in the application below.

The impedance for both circuits was collected at the open circuit potential (DC = 0 VOCP) using a Potentiostatic EIS script from Gamry Framework Electrochemical Energy software package. The dual-electrometer mode of the Interface 5000 is selected by clicking “Both” during the initial parameters set up as shown in Figure 4. 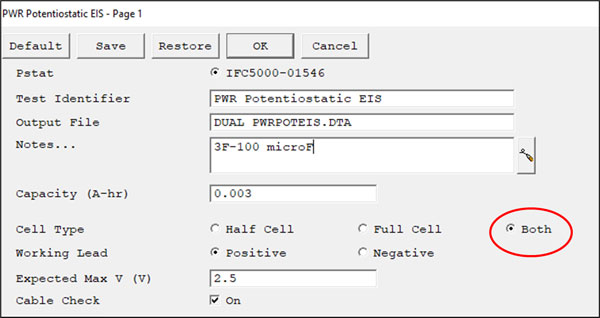 The importance of this measurement is as follows: In dual-electrometer mode, we can separate, identify, and model the impedance elements in each half-cell. The important factor is the position of the reference electrode relative to both the working sense and counter sense leads.

Right away, we can identify some advantages for using the dual-electrometer mode.

As a final sanity check, we should compare the fitted values to the specified values and tolerances of each resistor and capacitor. A quick comparison of the fitted values (Figures 5 and 6) against the nominal values.  (Tables 1 and 2) shows that we were successful in measuring the impedance response of the AC Dummy Cell and the custom electronic circuit.

View all of our Demonstration Videos