There are many applications for the assembly of polyelectrolyte films – corrosion inhibition, chemical and biological sensing, and electrochromics, for example. Layer-by-Layer (LbL) assembly is a technique where alternating layers of positively and negatively charged layers are assembled in sandwich-like fashion as shown below.

Two advantages of this technique over other thin-film deposition techniques are cost and control. Monitoring LbL assembly via a quartz crystal microbalance (QCM) is an accurate yet inexpensive technique that requires no expensive hardware such as atomic-layer deposition or Langmuir-Blodgett. Assembly is usually by an alternating dip method or via a flow system.

QCMs have a variety of uses in addition to monitoring LbL assembly.

This application note details the construction of bilayers of polyallyamine HCl (PAH) and polystyrenesulfonate (PSS) onto a quartz crystal as shown below.

A 10 MHz Au-coated quartz crystal was initially functionalized by immersion in a 1 mM solution of 3-mercaptopropane sulfonic sodium salt in ethanol. The purpose of this was to prepare a negatively charged surface for the attachment of PAH (average molar mass of 200 kDa). The cell was then washed with dilute HCl and filled with a salt solution. After one minute, a solution of PAH was added to the cell. Once the frequency decrease had stabilized the experiment was stopped. Next, the cell was emptied, rinsed several times and refilled with a salt solution. One minute after continuous acquisition was started, a PSS (average molar mass of 70 kDa) solution was spiked into the cell. The frequency decreased immediately and leveled off after approximately three minutes. This process was repeated a total of 10 times.

Figure 1 shows the frequency decrease associated with the addition of the PAH to the quartz crystal. 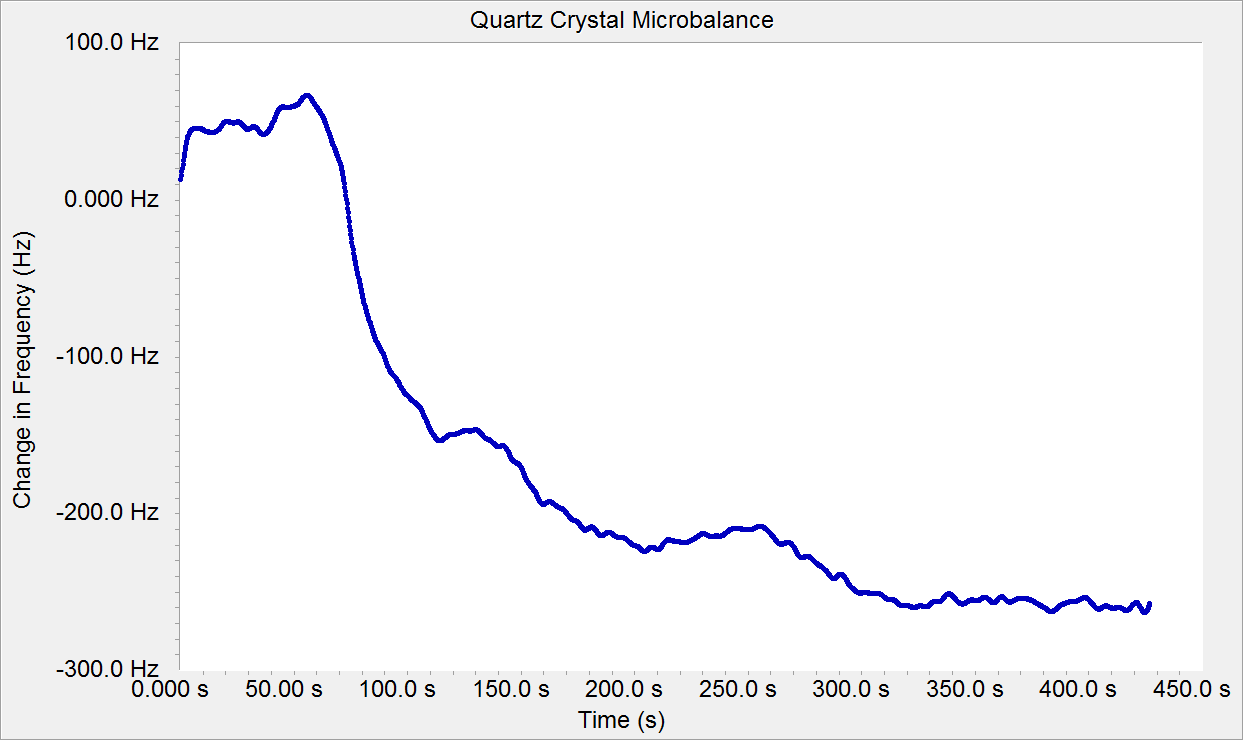 Figure 1. Frequency decrease upon addition of PAH to cell. PAH was spiked into the cell one minute after start of continuous acquisition.

The addition of PSS to the crystal resulted in a similar drop in frequency as shown in Figure 2. 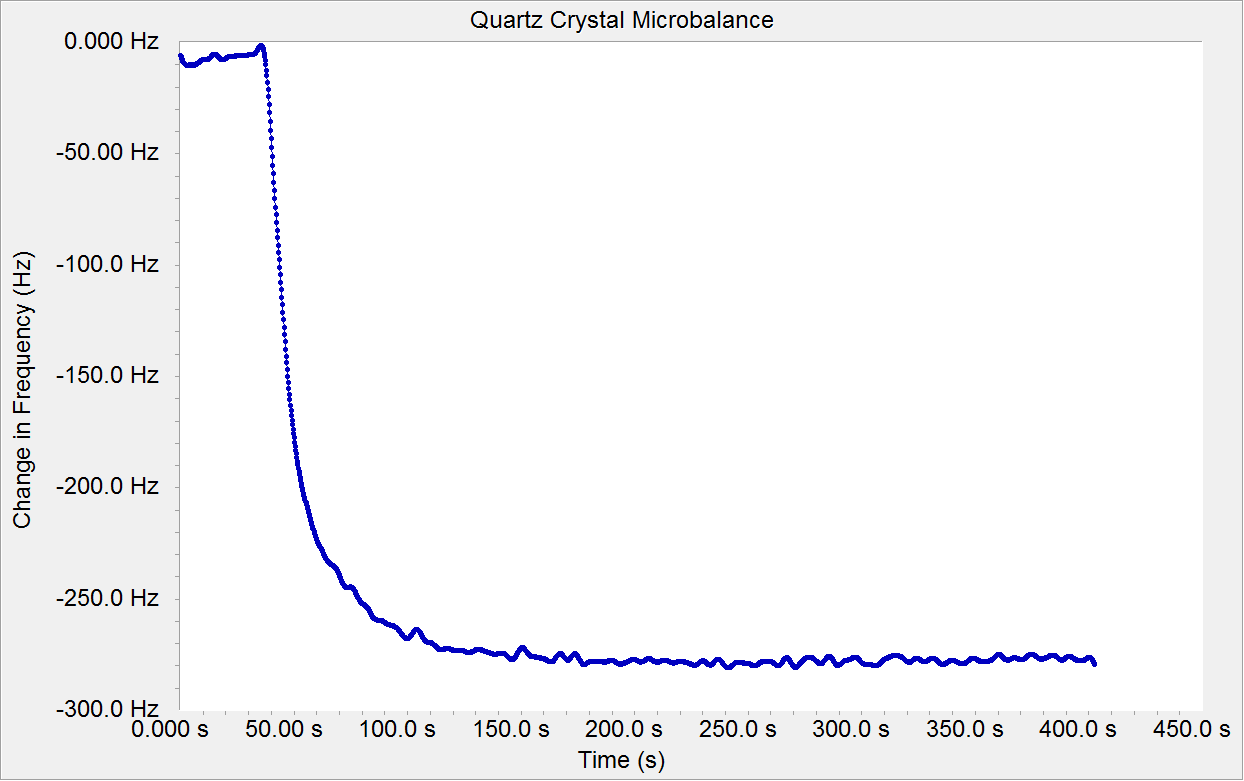 Figure 2. Frequency decrease upon addition of PSS to cell. PSS was spiked into the cell approximately one minute after start of continuous acquisition.

The frequency data for the next 18 steps were then stitched together such that the beginning of one experiment was added the end of the previous experiment and plotted as shown in Figure 3. 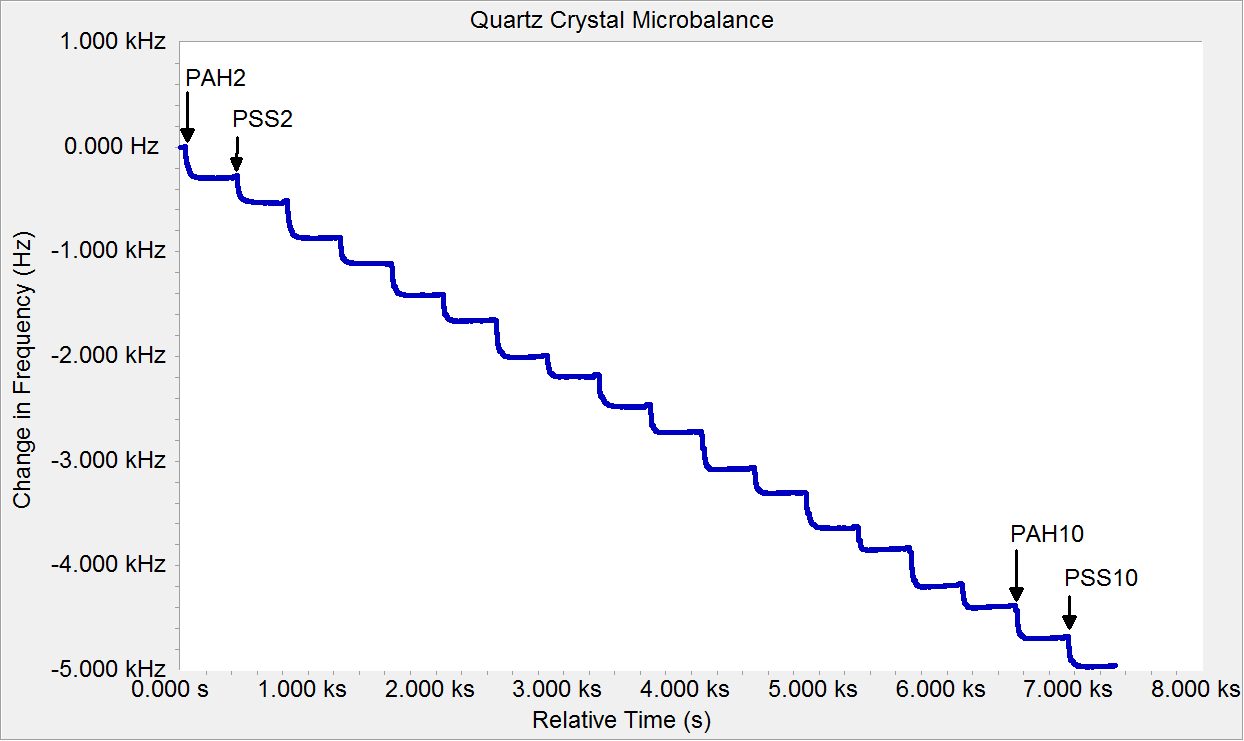 This application note was meant to highlight the ease of monitoring LbL assembly using a quartz crystal microbalance.

Gamry Instruments would like to acknowledge the Advincula Group at Case Western Reserve University for the generation of these data.